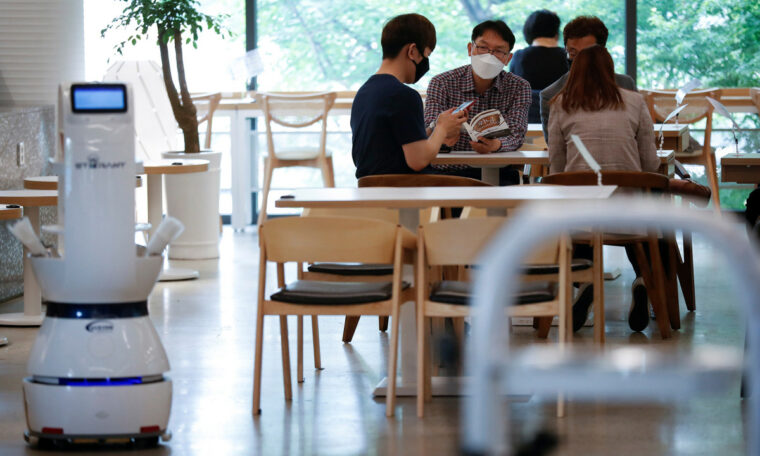 DAEJEON, South Korea: The new barista robot in the Daejeon, South Korea cafe is courteous and fast as it seamlessly targets customers.

“Here’s your Rooibos almond milk coffee, enjoy. It’s even better if you shake it, “he says, as a customer drinks his drink from a tray installed inside the large, shiny, white, capsule-shaped computer.

After successfully curbing an outbreak of the new coronavirus that infected more than 11,000 people and killed 267, South Korea is slowly shifting from intensive rules of social distancing to what the government calls “distancing in daily life.”

“Our system does not need input from people from order to delivery, and the tables were sparsely organized to ensure smooth movement of the robots, which fits perfectly with the current” disconnect “and distancing campaign,” he said.

Using a robotic arm to make coffee and a robot to serve, the system can make 60 different types of coffee and serve drinks to customers in their seats. It can also communicate and transmit data to other devices and contains autonomous driving technology to calculate the best routes around the café.

An order for six drinks, processed through a kiosk, took just seven minutes. The only human employee in the two-story cafe was a pastry chef who also does some cleaning and stuffing.

The manufacturer and the scientific institute aim to supply at least 30 robot coffees this year.

“Robots are fun and it was easy because you don’t have to pick up your order,” said student Lee Chae-mi, 23. “But I’m also a little concerned about the job market as many of my friends are doing part-time jobs in coffee shops and these robots would replace humans.”