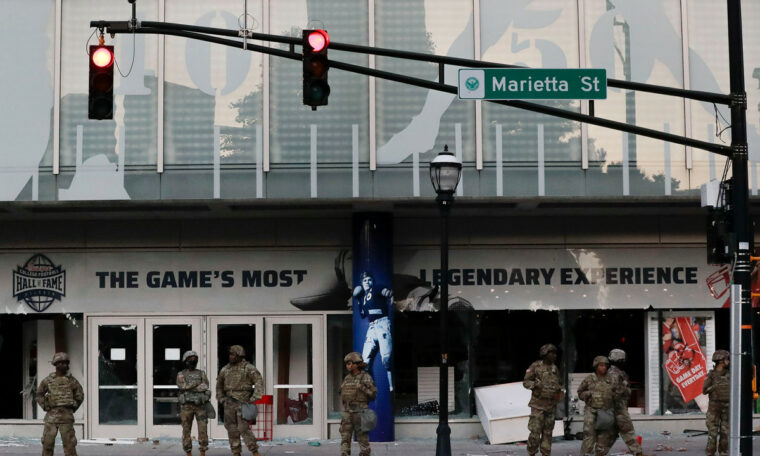 The College Football Hall of Fame in downtown Atlanta was smashed and looted Friday as part of the riot in response to the death of George Floyd.

The windows of the hall of fame were smashed and the gift shop was ransacked, according to local police.

It is not known whether the museum portion of the building was destroyed and the full cost of the damage.

The hall of fame is located near the Centennial Olympic Park and the CNN Center, which was also attacked in the riots.

“Protesters continue to damage businesses, looting and burning buildings,” said the Atlanta Police Department Sgt. John Chafee said in a statement Saturday morning. “There has been looting in the College Football Hall of Fame … and many other businesses. We are grateful for the assistance provided by multiple local and state law enforcement partners as we work to minimize the damage caused by these people and restore order in our city. “

Georgia Governor Brian Kemp declared a state of emergency while the National Guard was deployed to protect Atlanta.

The protest was in response to the death of Floyd, a 46-year-old black man in Minneapolis who was killed by a white police officer last week. Derek Chauvin, the policeman, was arrested Friday and is being charged with third-degree murder and second-degree manslaughter after pressing his knee to Floyd’s neck after Floyd was suspected of having spent a falsified $ 20 bill while shopping for groceries.

In 2014, the hall of fame moved from South Bend, Indiana to Atlanta.

“In the coming days and weeks, we will work to collect the pieces to rebuild the sacred walls that harbored memories and honored those who played the game, many of whom fought these injustices during their careers.”