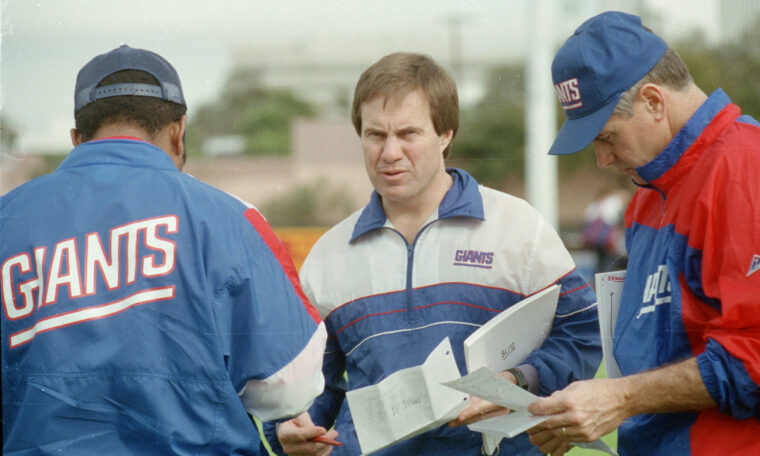 In a weeklong series, The Post is looking at alternative realities in New York sports. Today’s edition looked at whether the Giants would have won a second consecutive Bowl if wide receiver Plaxico Burress hadn’t shot himself in 2008. Below are other great Giants events from the past 30 years:

What if Bill Belichick was the successor to Bill Parcells in 1991?

Parcells left in May after the 1990 Super Bowl winning season. But before that, GM George Young had shown favor with Ray Handley, the running coach and clock manager, over Belichick, the defensive coordinator Young thought was cursing too much and it was kind of weird. Belichick left in February, leaving Handley to be named head coach, and the rest is a very sad Giants story. Belichick seems to have had some success.

GM Ernie Accorsi loved Manning, really liked Ben Roethlisberger, and was not interested in drawing Rivers. Just over seven minutes into San Diego’s allotted 15 minutes on the clock with the No. 1 pick overall, the Chargers GM A.J. Smith called Accorsi and asked, “Do you want Eli?” Smith insisted that Osi Umenyiora be part of the package and was rejected. Smith loved Rivers, and Manning had already stated that he did not want to play in San Diego. The deal was made and the league office was called just in time. The Chargers took Manning, the Giants at No. 4 took Rivers and then traded the players.

It is hard to believe that Nicks is only 32 years old. He collected 155 catches for 2,244 yards and 18 touchdowns over a span of two years and was a central figure in the Super Bowl XLVI career. He hurt his left knee in a big win at Tampa Bay, and although he only missed the next three games, it was never the same. If Nicks stays healthy and productive, the Giants don’t take Odell Beckham Jr. with the 12th pick in the 2014 draft. They’ll probably take over Zack Martin (taken No. 16 by the Cowboys) or, perhaps, the player taken at No. 13 by the Rams: defensive tackle Aaron Donald.

Submit your Giants questions here to be answered in an upcoming mail bag.

What if Tom Coughlin didn’t become more player friendly after the 2006 season?

Coughlin came close to being fired after the Giants went 2-6 in the second half of the 2006 season to finish 8-8. He was unpopular, seen as a curmudgeon, unwilling to bow down and not caring about the needs of his players. Michael Strahan was openly defiant of Coughlin’s “five minutes before” mantra. Co-owner John Mara had enough and told Coughlin that he had to stop being so nasty. Charles Way, a former Giants fullback who was working as the team’s director of player development at the time, offered this advice: “You should let players see you as you are with your grandchildren.” That hit home and became a crossroads. moment in franchise history.

What if Trey Junkin, in his first and last game for the Giants, didn’t make a bad shot in a wild card playoff game in the 2002 season?

Junkin, a long-time NFL snapper for 19 years, was summoned out of retirement to replace the injured Dan O’Leary (who replaced freed rookie Bob Jones). After the 49ers surprisingly converted a 38-14 deficit to a 39-38 lead, the Giants had a chance to avoid a monumental collapse, as Matt Bryant lined up for a 41-yard field goal in the last second. Junkin’s shot to rookie starter Matt Allen was low and wide, and all Allen could do was pick up the ball and throw an unfortunate pass that fell incomplete. Referee Ron Winter missed a blatant interference penalty on eligible receiver Rich Seubert and declared that the game was over. That devastating loss stuck with head coach Jim Fassel, who was fired after next season.