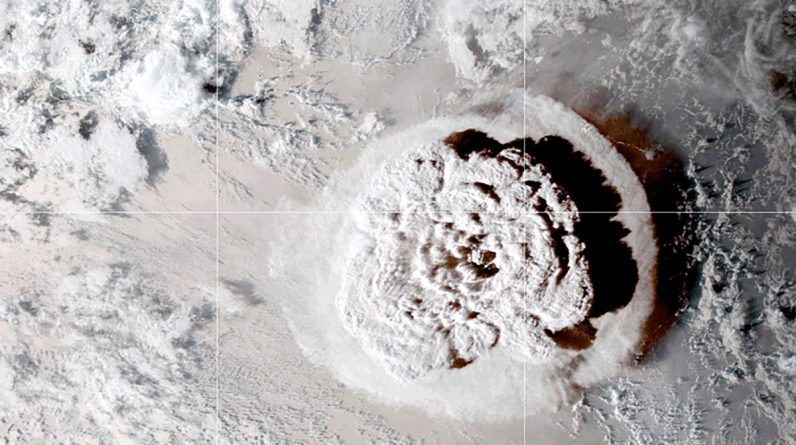 Volcanoes in Tonga: The explosion reached a record height beyond the stratosphere

Last January’s explosion in Tonga was the most powerful on record, with energy equivalent to hundreds of nuclear bombs and debris propelled more than 40km into the air.

l’A deadly volcanic eruption A New Zealand-led team of scientists revealed on Monday that it hit the Tonga Islands earlier this year, the strongest on record with modern instruments. The Hunga-Tonga-Hunga-Ha’pai submarine volcano erupted violently in mid-January. Equivalent to hundreds of nuclear bombsCauses a tsunami at a height of 15 m.

Three people were killed during the disaster, when houses were destroyed and communications cables connecting the archipelago to the Internet network were broken. This is how this small Pacific country found itself Cut off from the rest of the world For weeks, that complicated rescue efforts.

The mesosphere has passed

According to a study by New Zealand’s National Institute for Water and Atmospheric Research, nearly 10 km3 of material was thrown, equivalent to 2.6 million Olympic swimming pools. Beyond the stratosphere, in the region of the atmosphere known as the mesosphere, the debris was ejected to heights of more than 40 km. “explosion Reaching a record height, this is the first time we’ve seen it cross the mesosphere,” said marine geologist Kevin Mackay.

The Hanga Tonga-Hunga Ha’pai eruption rivaled the 1883 Krakatoa disaster, which claimed tens of thousands of lives at a time when Indonesia did not have modern measuring devices. “Although this eruption was significant – the biggest since Krakatoa – the difference is that it was an underwater volcano and that partially explains why there were tsunami waves. Important,” Mr. Mackay added.

The team of scientists identified three-quarters of the material projected during the explosion, with the rest made up of debris scattered in the atmosphere. According to the geologist, the plume that rose above the volcano contained nearly 2 km 3 of particles that “remained in the atmosphere for months, resulting in beautiful sunsets” visible even in New Zealand.

His team also found that the crater of the volcano is now 700m deep. Pyroclastic flows generated by volcanic eruptions reaching temperatures of 1000 °C and velocities of 700 km/h carried debris to the seafloor at least 80 km from the volcano.

“But pyroclastic flows seem to extend up to 100 km,” said Emily Lane, the team’s research director.

See also  Prehistoric people collected the tools of their ancestors