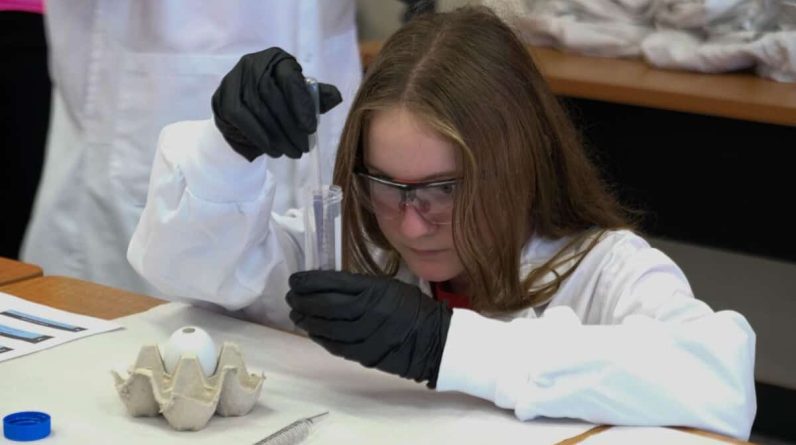 While choosing to continue their studies, scores of high school girls strolled the corridors of Polytechnic Montreal on Saturday to discover careers in science.

As an engineer, computer scientist or biologist, science is not about spending whole days alone, in a laboratory, doing experiments, an image that the “women and science” phenomenon tries to debunk.

“We try to provide role models for these young women. During the day, they will meet the girls and show them what all science careers are for,” explained Nancy Runcourt, engineer and chair of the organizing committee.

Interest was very high among women who were able to participate in scientific workshops, discuss with forty companies and universities, but also attend Yannick Bergeron’s chemistry exhibition.

The author who conducts experiments for the magazine “Les Débrouillards” was not present at the first edition of the event and regularly participates in events organized in Rimouski, Quebec or Sherbrooke.

A student who has been hooked on science since age 9 thanks to his broadcasts, he knows how transformative these kinds of encounters can be.

Now 16, Elodie Levigne knew she wanted to be a veterinarian and was happy to see so many girls interested in science like her.

“Women are very afraid of science because they don’t want to push themselves, but I think they should because if you are interested, there are many activities that can be done”, she said.

Nathalie Beaudry, a university president hired by Bell, realized 20 years ago that it was difficult to find women to fill scientific positions.

“The reason we don’t have female candidates is because we don’t have any girls in our schools,” says the woman who founded the event in 1998.

While civil or biomedical engineering attracts women, according to Anne-Sophie Guerin, a 4th-year Polytechnic student and mentor-animator at Hydro-Québec, the IT sector still has difficulty recruiting.

Women represented 9% of computer engineering students in Quebec in 2020-2021, down from 16% in 2018-2019, according to data from the Leader for Women in Engineering, Science and Engineering.

Results that only inspire event participants to make a difference. “Not everyone can go to NASA, but all it takes is a spark to change someone’s mind,” Ms. Rancourt summed up.