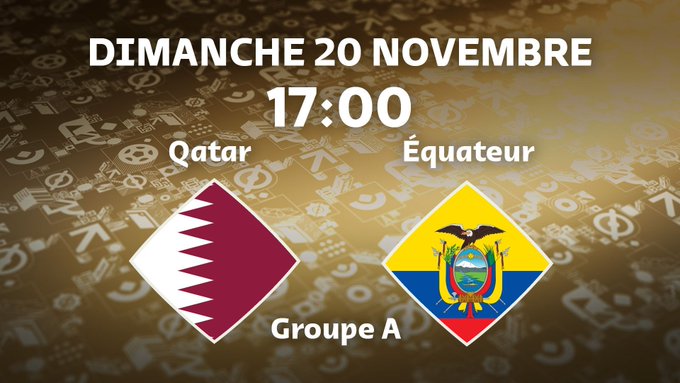 Initially 32 countries:
32 nations are competing in the 2022 World Cup. The program for the tournament consists of 64 matches, which will be held in 8 stadiums and 4 cities.
Morocco enters the tournament on Wednesday, November 23 from 11am. It will be against Croatia.

Qatar vs Ecuador at 5pm:
Qatar will be the host nation against Ecuador at the start of the tournament

Qatar:
– Qatar participates in its first World. A unique case out of 32 qualifying exams. 50th in the FIFA world rankings. Among the 32 teams participating in the World Cup, only Saudi Arabia (51st) and Ghana (61st) are lower.
Ecuador:
Ecuador, ranked 44th in the FIFA rankings, is back, absent from the last two editions. He has already participated in 3 World Cups in 2002, 2006 and 2010. This is his 4th time.

Referee:
– 46-year-old, 2010 international, Italian Daniele Orsato will referee the opening match. Four years ago in Russia, during the previous World Cup, he was in charge of video assistant referee (VAR).

On which channel?
Spoiled for choice to follow the ceremony and the opening match: Arryadia, BeIN Sport, TF1, RTBF…