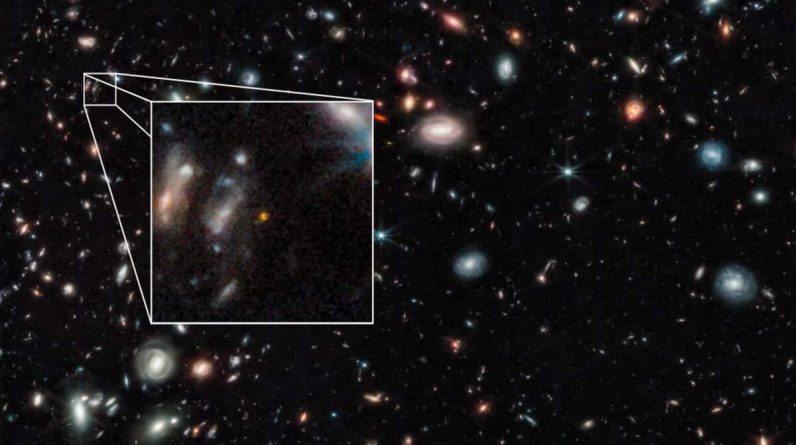 The first galaxies may have formed earlier than astronomers previously thought, according to preliminary observations from the new James Webb Space Telescope, which have already shaken up scientific understanding of the cosmos in just a few months.

“One way or another, the universe was able to form galaxies faster and earlier than we thought,” said Tommaso Drew, professor of astronomy at UCLA.

One of the main missions of the James Webb Telescope, in its fifth month of observations, is to study the first galaxies that formed after the Big Bang 13.8 billion years ago.

Based on detailed cosmological models, scientists thought it would “take time” to find them, said astrophysicist Jayhan Kartaldeb.

However, in just a few months, James Webb has already identified several new young galaxies, including one 350 million years after the Big Bang – 50 million years less than the previous record.

“It’s surprising that there are so many that evolved so early,” commented Jeyhan Kartaldeb.

In addition to their numbers, one thing surprised scientists: their great luminosity.

“We immediately come to the conclusion that they are massive, which raises a real puzzle: How can they form so many stars in such a short period of time?”, summarized Garth Illingworth of the University of California, Santa Cruz.

To do that, “these galaxies must have started forming only 100 million years after the Big Bang,” he explained. “No one would have believed that the dark ages would end so soon.”

An alternative hypothesis is that these galaxies are actually so-called Population III stars, very different from what we know. These first stars, extraordinarily bright, have so far only been theoretical, not observed.

The incredible capabilities of the James Webb Telescope have also revealed the origins of some of these galaxies.

“Our team was struck by measuring the shape of these early galaxies,” Erika Nelson of the University of Colorado was quoted in the NASA report. “Their quiet, orderly disks challenge our understanding of how the first galaxies formed in the chaotic young universe. »

The exact distances of these young galaxies – including the record breakers – should be confirmed in the future thanks to spectroscopic analyzes carried out by James Webb.

But in any case, thanks to this new observatory, Garth Illingworth marvels, “We are on the right track to realizing this dream of understanding the galaxies of the first ages.”