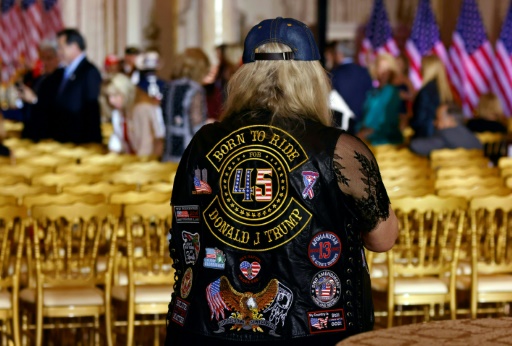 They came with flags, t-shirts and hats emblazoned with their idol Donald Trump. Fans of the former US president gathered around his home in Mar-a-Lago, Florida, waiting for hours for the expected announcement of his 2024 presidential bid.

“I’m so excited. It’s almost like Christmas morning and Santa Claus is coming,” laughed Stacey Bovasso, 54. “Donald Trump is our president and we want him back.”

Like this tech company employee, many have taken their afternoons and even their days to be here.

They share the oft-denied belief that the 2020 election was stolen from Donald Trump, who has been hammering it for two years.

For 41-year-old Daniel Thibow, who traveled nearly 300km from Tampa in the state’s west, he had no doubts.

“The next election will be the third election he will win. The last one he lost was due to fraud.”

On the bridge leading to the former president’s palatial home, a group hoisted flags that specifically read “Trump 2024 – Take America Back” and “Communism Sucks.”

In a festive atmosphere, a loudspeaker spits out the usual soundtrack, including Bruce Springsteen’s ultra-classic “Born in the USA.”

Among the faithful, these believers believe that the country is in danger of collapse – and that only Donald Trump can save it.

“This new administration is destroying America,” said Eric Pardy, 54. “They destroy our national liberties, our borders, our economy and public order.”

For him, Trump’s return is the only solution. “This man loves this country and defends it, and that’s what a president should be: someone who defends our Constitution.”

Stephanie Liu, a natural-born American born in China and living in America for 21 years, shows even more enthusiasm for the real estate mogul.

“He was chosen by God to fight for our country. His patriotism is what motivates us to support him,” said the 50-year-old social worker who made the trip from New York.

As if to contradict her, a small publicity plane flies over Mar-a-Lago towing a banner that reads: “You lost again, Donald. DeSantis 2024.”

Florida Gov. Ron DeSantis, seen by many as Donald Trump’s main challenger in 2024, has broad support in his home state.

“I love Ron DeSantis,” says 60-year-old businesswoman Karen Reinhardt. “But he should continue to be our governor. When Trump’s term ends, it’s his turn.”