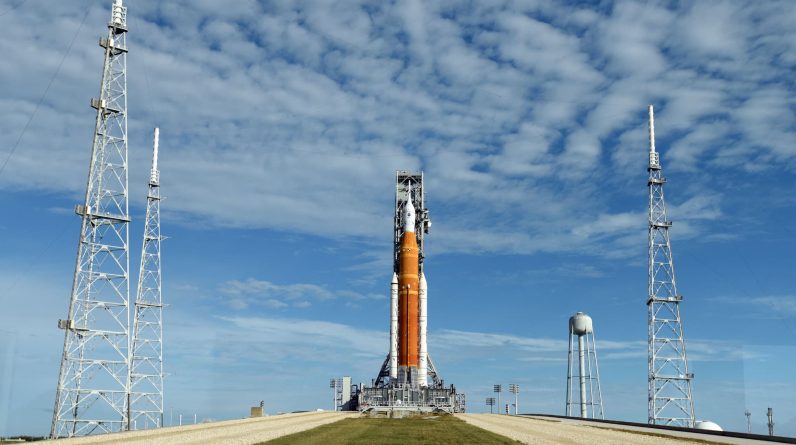 Postponed three times, the launch of a NASA rocket was supposed to mark the first step toward Americans returning to the moon. But Wednesday’s launch attempt is subject to weather conditions.

Ignition delay for the Artemis 1 mission. A NASA rocket set to launch into lunar orbit this Wednesday will once again attempt to leave the launch pad in Cape Canaveral, Florida. Again, because this is the fourth attempt to launch this drone since this summer.

August 29, September 3, September 27 and then November 14, 2022. For nearly three months, the US space agency has been looking for its best chance not to miss a big return to Earth’s only natural satellite. While the first two reports were due to a fuel leak on the rocket, the last two were due to Hurricanes Ian and Nicole, which disrupted Florida airports.

However, in normal times, weather conditions are much less favorable for airplanes than for rockets. Space rockets are actually very sensitive to weather, Christoph Bonnall, a launcher expert at Cnes, explained to us (National Space Research Centre, editor’s note).

“We can build a missile that supports everything: it’s called an intercontinental ballistic missile. It’s very heavy and costs us a lot in performance,” he explains to BFMTV.com.

“It doesn’t have the same restrictions as a plane, a rocket needs more materials, which is incomparable”, says Olivier Moussis, astrophysicist and director of the Origins Institute. “Here, we’re pushing materials to the limit of their resistance.”

The mass of the rocket plays a big part in this, especially during launch when thrust is weak. So everything is a matter of choice and calculation

“The wall of Ariane 5’s main stage, at its thinnest point, is 1.5 millimeters thick. It is proportionally thinner than a cigarette paper”, the engineer underlines. “The other side of the coin is that it shouldn’t be affected, either we blow it too much or there are too many external aggressions.”

Wind and lightning are the two main hazards

Not all “outside aggression” is created equal. Thus rain does not pose a problem and does not prevent the rocket from leaving its launch pad. For potential clouds in the rocket’s path, it’s more complicated.

“Like airplanes, we don’t like to think we’re going to pass a cumulonimbus cloud: we can’t take off when there are big dense clouds and there’s a possibility of hail in them,” explains Christoph Bonnel.

Space weather must also be taken into account. This could disrupt rocket launches, especially if the sun produces flares, as “it could affect the electronics on board”.

One weather phenomenon is particularly feared by space agencies: wind, which can divert a missile from its path. The risk is especially high during takeoff when the rocket is on its launch pad and about one meter high — “the moment when we are most sensitive to crosswinds.” It becomes zero only after reaching 50 km after dividing the levels.

To prevent any risk, agencies send a sounding balloon along the rocket’s launch path hours before takeoff to measure wind variables. In the same way, space centers have lightning detectors to analyze the electromagnetic variations of the atmosphere caused by potential lightning.

“If there is danger within a few kilometers of the rocket, we will not fire,” assures Christoph Bonnel. The expert recalled that the Saturn V launcher of the Apollo 12 mission was struck twice by lightning during takeoff. The unexpected event caused the launcher to malfunction, but it was later resolved by the crew.

Neither too hot nor too cold

Weather conditions in the hours before departure are equally important. In 1986, the space shuttle Challenger disintegrated a few tens of seconds after leaving Cape Canaveral, killing seven crew members. Investigators concluded that the seals had been exposed to the cold the night before departure and had broken during takeoff.

Conversely, if temperatures are too high, the hydrogen in the engines is at risk of boiling. Therefore, the temperature is monitored very closely: it should fluctuate between 5 and 35 degrees Celsius.

“The worst can happen at any moment when a rocket takes off,” recalls Christoph Bonnell. “Usually we have the weather forecast an hour before the green light launch, so we have good hope.”

Also checked the weather on the way back

The sky is also heavily monitored during atmospheric re-entry (when a natural or artificial object enters the atmosphere). Especially space debris (rocket debris, defunct satellites, etc.) or a meteorite can cause some out-of-control as it approaches or returns to Earth.

When it comes to the return of manned capsules or spacecraft, weather again plays an important role. In 2021, the return of Thomas Beskett and other astronauts from the International Space Station (ISS) has been postponed several times, and their arrival should be done by landing. “There is, obviously, a very significant meteorological criterion, because it is necessary to guarantee that the rescue boats are not too far away”, underlines Christoph Bonnell.

A precedent dating back to 1976 marked spirits. The return to Earth of the Soyuz 23 spacecraft, with two astronauts whose mission had to be aborted, takes place in the middle of a blizzard. Supposedly landing on the steppes of Kazakhstan, the capsule makes its race over a hundred kilometers away and lands in… a lake. After hours of searching and dangerous rescue operations, the crew emerged unharmed.

As meteorological instruments improved, so did rockets. Nevertheless, they are subject to the same restrictions as they were 40 years ago, explains Christoph Bonnel: “Launchers that have become lighter and more efficient are no longer available than before, so it comes down to the same level.”

As for the Artemis mission, the first flight of the world’s most powerful SLS rocket is scheduled for Wednesday at 1:04 a.m. local time (7:04 a.m. in Paris), with a launch window of two hours. If set off, the journey will last 25 and a half days, after which it will land in the Pacific Ocean on December 11.