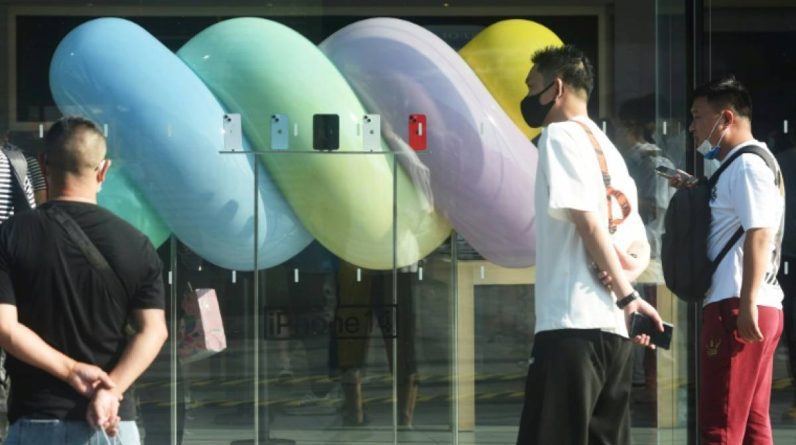 Apple has imposed restrictions on its iPhones sold in China for file sharing between devices, which can be used to evade censorship and spread hostile or critical information.

China already closely monitors its Internet network and media. Every day, the censor board deletes content that portrays government policy in a bad light or creates unrest.

Social networks are subject to strict control, while access to many foreign sites cannot be done without spin-off software such as a VPN.

Using an iPhone can create a parade to escape censorship. On these phones, the AirDrop function makes it possible to share all kinds of content, including photos and videos, with another nearby Apple device.

Now there’s a feature banned in China: With the US group’s latest update, all iPhones sold in the country will automatically disable the option after 10 minutes for devices not in the user’s contact list.

Banners hostile to President Xi Jinping were briefly hung on a bridge in the capital shortly before the Communist Party congress. The gesture of defiance came as a surprise in a city heavily armed with security forces and countless surveillance cameras.

Apple told AFP that the update curbs junk file sharing and plans to roll it out globally next year.

The brand’s products sold outside of China do not currently appear to be affected by these restrictions in the latest update to the iOS 16.1.1 mobile operating system.

Some internet users took to the Weibo social network on Thursday to welcome a positive move to “significantly reduce” “harassment” from strangers.

Others mocked the Apple boss. “Is Tim Cook a member of the Communist Party?” asked one of them mockingly.

Brahma Chellane, a professor of geopolitics at several universities, accused Wall Street of being a “long-term powerful ally of China.”

“Latest example of a US company trying to appease China: Apple restricts AirDrop in China only after Chinese dissidents use AirDrop to evade online censorship and distribute posters against Xi Jinping and the Chinese Communist Party,” he tweeted on Thursday.

Apple products, from the iPhone to the iPad, are extremely popular in China, one of the American group’s main markets outside the US.

The Apple brand has always avoided taking a stand on important issues or offending Chinese power. Its CEO has been received several times by senior officials like the Head of State.

In 2019, Apple found itself in the crosshairs of the official press for approving an application that would allow police officers to be located on a map in Hong Kong. A highly controversial service when the region was rocked by massive pro-democracy demonstrations.

In 2017, the US company was heavily criticized for removing VPNs from its app store in China at the request of authorities.

“Apple needs to understand the real risks that China will be more exposed to in 2022,” said Isaac Stonefish, managing director of strategic risks. “Whether or not they give the impression that they might leave China will have a huge impact on the future of the business,” he added.

See also  Pan-Aquil: His tube has been dry for a week