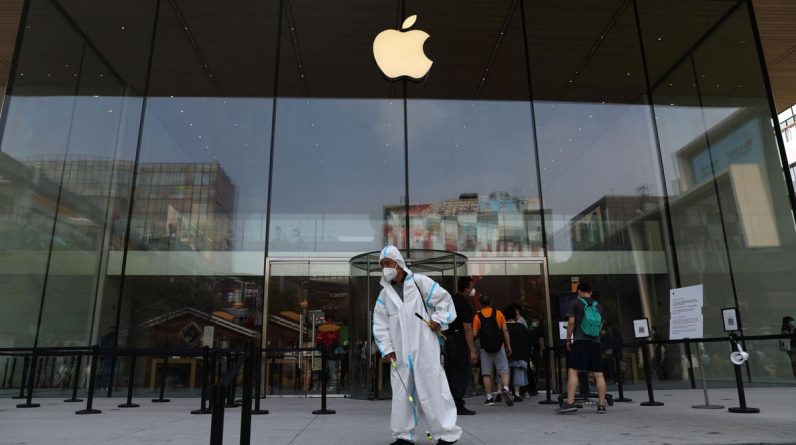 Bad news as the holiday season approaches. “Customers will have to wait longer to receive their new products,” Apple said in a statement late Sunday. iPhone 14 Pro shipments are lower than expected Control of a factory in China linked to anti-Covid restrictionsThe American team warned.

Apple said the main iPhone production site in Zhengzhou (central China) is “currently operating at significantly reduced capacity” since the discovery of positive Covid-19 cases. “As we have done since the beginning of the pandemic, we prioritize the health and safety of workers in our supply chain,” the Apple brand said.

Taiwanese group Foxconn, Apple’s main subcontractor, has faced off since October. A surge in Covid-19 cases at its largest site in Zhengzhou, the largest iPhone factory In this world. Foxconn said in a press release that it expects worse-than-expected results later this year.

“The group’s outlook for the fourth quarter was early on Be cautiously optimistic But as the pandemic affects some of our operations in Zhengzhou, the company will revise this outlook downward,” the Taiwanese company said.

“Foxconn is now working with authorities in a joint effort against the pandemic to resume production at full capacity as quickly as possible,” he added. The company did not specify the extent of the control’s impact on its financial results. It will release its third-quarter results on Thursday and hold a conference call with investors on the occasion.

Foxconn has announced new measures for its employees on the social network WeChat, specifically a “sanitary bubble” between dormitories and the factory. Continuing staff will be grouped in three dormitories, the group said.

At first, hundreds of workers were exasperated by their living conditions He left the factory in the disaster last week. Other Foxconn production sites, unspecified, are being sought temporarily elsewhere in China, particularly in the country’s manufacturing base of Guangdong (southern) province, according to Ivan Lam, an analyst at specialist firm Counterpoint.

“However, it will take time to ramp up production” and overall output may not be on target anyway, he points out. According to calculations by specialist firm TrendForce, Apple will produce 2 to 3 million fewer iPhones this quarter than an estimated target of 80 million due to a resurgence of the epidemic in Zhengzhou.

“All of this confirms Wall Street’s fears about Apple this quarter and will be a drag on tech stocks this week,” said Don Ives, an analyst at US investment firm Wedbush Securities.

The Apple brand is based in China, where more than 90% of its products are manufactured. The country is one of its most important markets. Unlike its neighbors in Silicon Valley, Apple has so far weathered the economic crisis well, even as the strong dollar weighed on its earnings.

From July to September, the US group reported sales of the iPhone, its flagship product, up 9.7% year-on-year to $42.6 billion. During the holidays, the company and experts expected strong demand for the iPhone 14 and 14 Pro Max.

Foxconn is China’s largest private sector employer, employing more than a million people at its approximately 30 factories and research facilities in the country. The Zhengzhou site, located about 600 km from Beijing, employs up to 300,000 people year-round in an “iPhone City” of sorts within a city.

See also  That's life After meat-free meat, the new challenge of food culture in the laboratory is breast milk

China is adopting a strict strategy against the Covid disease. Despite recent rumors of a possible relaxation, officials on Saturday vowed to stick “unhindered” to the zero-Covid policy.

The number of cases has been rising in recent weeks, with 5,643 new cases reported on Monday, a six-month high.