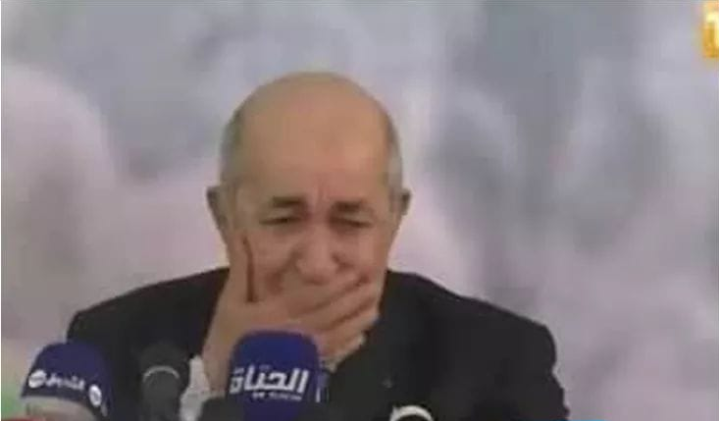 While Dbibina was casually surfing the web, she suddenly found an Algerian channel “El Hiwar” proudly announcing that she and an American NGO had filed a “hiwarer” operation with a local lawyer named Mounir Gattal. An investigation has been opened by the ICC against King Mohammed VI’s personal and head of Moroccan intelligence, Abdellatif Hammouchi, for “organized crimes against sub-Saharan migrants. The border separating Septa and Melilla” …

Alaadiif Alaadiif…. But this is all serious!!!! Our King and Our Hamochi were prosecuted by the ICC following a US NGO and an Algerian complaint alleging crimes against the sub-Saharan population “at the level of the border separating Septa and Melilla”. (btw here is the distance between “Sebta and Melilla”, where there is no border between the two…saying…)

It wasn’t until he started re-reading what he had written that Dibbina started insisting, and remembered that we were dealing with Algerian junk media, so Algerian junk information was very easily debunked. Other than that, to my biggest surprise, it turns out that the scam is bigger than the junk information in question!!! Brace yourself guys, because by the end of this article you will realize: “Impossible is not Algerian… in ta7imarit”!!!

It all started when the Algerian channel “El Hiwar” interviewed by Kattal thought it wise to publish on its website a copy of the letter from the International Criminal Court to support its allegations.… In its article, this trash media reiterates what Kattal rightly said in his interview, namely that a complaint has been filed and by the ICC against Morocco. An investigation has been initiated.

See also  The remnants of a collapsed building in Florida

By zooming in a little on this famous letter in English, Dbibina, who created the English LV1, realized that in fact the ICC Prosecutor’s Office had only sent an automatic reply to his dear Katal clearly explaining that “his documents” had been received. /letter in the company’s contact register” (so they can’t even say it’s a complaint), in paragraph 3, “The fact that this receipt is alleged does not mean that an investigation has been initiated. An investigation will be initiated by the prosecutor’s office” (which is completely contrary to the article and Katal’s allegations!!!)

Basically I would have sent DBPina’s nudity to the ICC Prosecutor’s office and he would have replied to me in the same email….

7-But by looking a little closer at the recipients of this email, we realized that our catal was accompanied by the famous Dr. Hamza Benalek, who represents the famous American NGO “WDJPO » or “World Diplomatic Organization for Justice and Peace”. …

This famous Dr. By looking at Hamza Benalek’s LinkedIn profile, we learn that this acorn head is an American lobbyist in the US Congress. POPOPOPOPO A TERADJI WILL SAY!!!!

Besides, you can see that he was the first person to get a doctorate before a master’s degree….

Curious to know more about this genius of the modern age, I decided to check out his Instagram page and to my great surprise, he is actually the head of an American NGO that complains against Raja and Hamochi. Hmmm what the hell????

11-He is an NGO that organizes many video conferences with international experts and leaders from around the world.

Besides, he is also known as “His Excellency Hamza Benalek”.. In addition to being an American lobbyist, doctor of international relations and head of an NGO well, he is an ambassador, a gentleman.

While queuing for milk in Algiers, watch him take part in the debate among his peers…

Here, for example, he held a video conference with French Ambassador Philippe Etienne on April 19.

Ssi Benalleg at least try to remove the “Hudson Institute” logo next time you make your photo gallery…forget it’s “World Diplomatic Organization for Justice and Peace”!!!!

Here he is in a video conference with his friends: American journalist Katie Morton and former US Ambassador to Germany John Emerson….pchaaaakh the bogoss!!!

Katie Morton and John Emerson were there to talk about a book about Merkel. But our Hamza Benalek Chaubanalah we did not see him….he was in DC Ozu.

He invited diplomats and experts to discuss business in the Middle East.

Except once again the conference on business in the Middle East in Jordan….seems our Benalek missed his flight from Oran….in short you understand the villainy of this scoundrel…no more to give. Examples….

20-Besides, this famous NGO based in the “United States of Tlemcen” also awards the Nobel Peace Prize to… guess the winner… it’s… Algeria

Guess who is the only employee of said NGO in the company of Honorable Doctor, Ambassador, President, Hamza Benalek.… It is the famous Mounir Katal who told us that an NGO American complained on Algerian TV. Against Raja and Hamochi…

In short, it’s too much for Dibbina, who thanks to our Algerian friends, has now discovered that human stupidity has reached a new level… But what do you expect from a country whose Moroccan obsession makes them more stupid every day? The highest in the state…