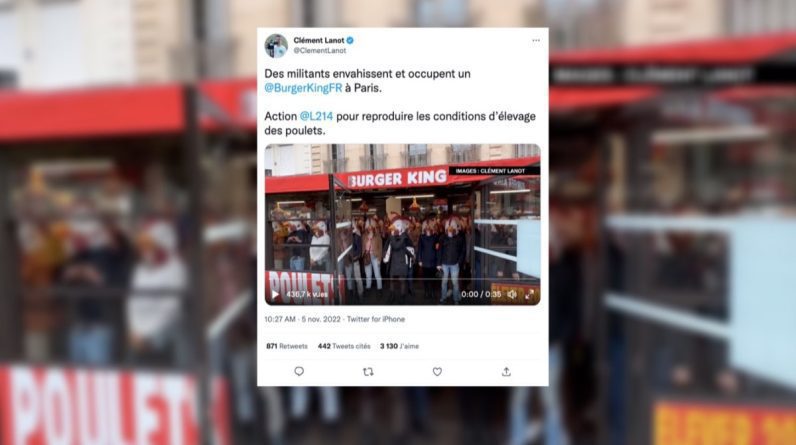 Activists from the L214 association, disguised as chickens, met this Saturday at the Burger King in the 1st arrondissement of Paris to protest the conditions under which chickens are raised.

This is a new strong action by activists of the L214 association. This Saturday, nearly a hundred supporters of the Animal Rights Association gathered at the Burger King restaurant located at 1.R District of Paris. Disguised as chickens, standing “tight as chickens” symbolically, loudspeakers broadcast the chirping of birds.

An act supported by elected officials

Many dignitaries expressed their support for this militant action which took place in a flash. Sandrine Rousseau, MP EELVand Andy Gerbrat, deputy LFI, were prominently present on the scene to denounce the breeding conditions imposed by the catering brand.

Stock @L214 To reproduce the conditions for raising chickens. pic.twitter.com/AbbxVCCVhZ

On that day TwitterBrigitte Gauthier, founder of the association, said the volunteers wanted to recreate the “terrible farming conditions” the chickens endured.

[Mobilisation en cours] volunteers @L214 To see the appalling conditions at a Burger King in Paris “as tight as chickens” . #Tight chickens

According to L214, conditions that the fast food company is unwilling to change. The association points out in a press release that up to 22 animals live per square meter and that the American company does not want to “end the worst practices of raising and slaughtering chickens.”