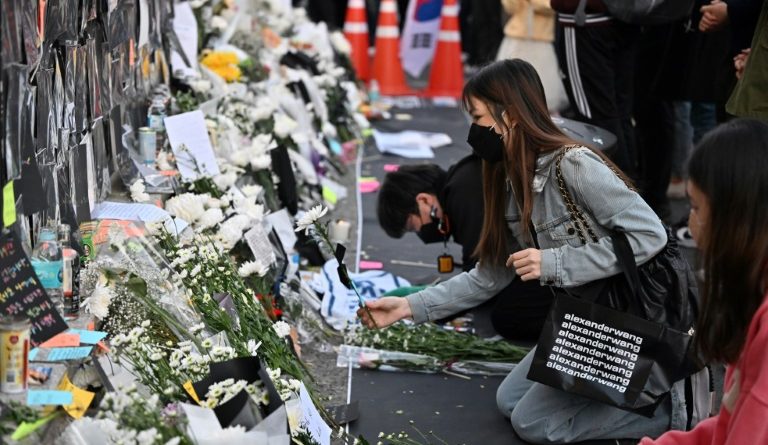 Halloween promised tens of thousands of people celebrating Halloween in Seoul’s cosmopolitan district of Itaewon before a horrific stampede left at least 156 people dead on a sidewalk.

A tragedy that could have been avoided, according to many analysts and senior officials.

South Korean officials admitted it: Police lacked crowd-control equipment and had to rely on bystanders to extricate bodies from the chaos that formed in a narrow alley.

“In most jams, it turns out that lack of planning is the root cause,” says Erik Kant, president of a crowd management company based in the Netherlands.

Without an organizer to preside over this Halloween party, the government did not ask bars and restaurants in the area to submit a safety management plan for the first time in Itaewon since the lifting of Covid restrictions.

Despite preliminary estimates, it relied on a crowd of 100,000. Only 137 policemen are involved in these ceremonies. 6,500 of them were mobilized to control a political demonstration, which was attended by 25,000 people simultaneously in another district.

The Mee Culpa tour began in the face of outrage from Korean civil society over the unpreparedness of law enforcement.

The Prime Minister said on Wednesday that the police’s delay in responding to several emergency calls, long before the stampede began, must be explained.

According to University of New South Wales crowd safety expert Milad Hagani, this Halloween night had all the makings of a disaster, including a maze of narrow lanes with no “possible escape route” when the crowd gathers.

But the problem is above all related to the lack of organization surrounding this event: “uncontrolled entry” of people into the restricted area, “lack of ticket sales”, which does not make it possible to understand the exact need of the stage and finally, there is no crowd control.

“It’s a recipe for disaster when you’re expecting a mass crowd,” said Mr. Haqqani notes that between this evening and the 2010 Love March in Germany, 21 people died of suffocation and hundreds were injured.

According to John Drury, an expert in crowd psychology at the University of Sussex, these incidents are caused by “mismanagement by the organizers of the event or venue” rather than “panic” by the crowd.

Mr Kant, from the Netherlands, says such street events require “months of planning” by experts to avoid people bumping into each other.

Among the measures to be taken: pre-assessing the carrying capacity of various venues, then calculating and monitoring the crowd size and potential disruptions – on the ground or via CCTV.

“During the event, if the maximum reception capacity is reached, access to this area must be closed immediately,” says the boss of the Dutch company.

But it took two hours in the morning before the access to Itaewon was actually closed, six hours after the first incidents.

“I am 100% convinced that this tragedy was preventable,” he insists. “The movements of the crowd are always predictable and therefore avoidable”.