Home World Lula or Bolsonaro, Brazilians are starting to vote for their president 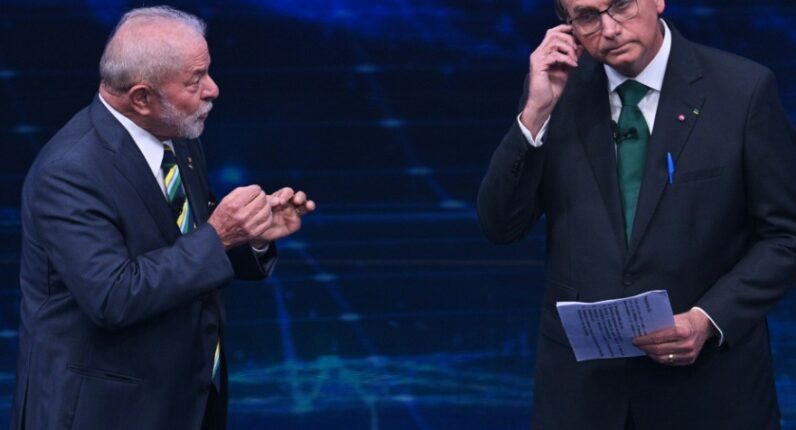 AFP President Jair Bolsonaro (R) and former President Luiz Inacio Lula da Silva face off in their first face-to-face debate in Sao Paulo, October 16, 2022, ahead of the second round of Brazil’s presidential election.

Brazilians began voting in the second round of a presidential election on Sunday, with a highly uncertain outcome between leftist former head of state Lula and his successor, far-right President Jair Bolsonaro.

The campaign between the two opposing leaders took place in a brutal and highly polarized environment that saw them insulting each other profusely, while social networks carried misinformation.

Polling stations will open at 8am (11am GMT) and close at 5pm (8pm GMT). The name of the president of the huge Latin American country of 215 million people will be known in two or three hours.

Marcio Brito, a 52-year-old unemployed man who was one of the first voters to cast his ballot in Rio’s tourist district of Copacabana, said he believes the election “can improve the situation of Brazilians a little bit”, especially in “health, education and security.

If months have been predicting a third four-year term for 67-year-old Jair Bolsonaro, after Luiz Inacio Lula da Silva’s 2003-2010, it might still be believable.

According to the latest Datafolha poll on Saturday evening, the gap narrowed, with Lula winning 52%/48%. The margin of error is +/- 2 points and the polls greatly underestimated Bolsonaro’s score in the 1st round.

“It’s a lot tighter than anyone thought,” Americas Quarterly editor Brian Winter told AFP, “and it’s going to be a messy election.”

Will Bolsonaro accept the decision, becoming the first president since the return to democracy in 1985 not to run for a second term?

After launching relentless attacks on the “fraudulent” system of electronic ballot boxes, he said on Friday: “Whoever gets the most votes wins. This is democracy” — without conviction.

Many fear a Brazilian version of the assault on Capitol Hill after the defeat of Donald Trump, for example, the Supreme Court, which Bolsonaro frequently disparages.

The former captain “could count on the support of his radical electorate (…) and cause unrest,” according to the analyst, underscoring the strength of democratic institutions despite the armed forces embarking on a coup d’état.

Trump, precisely, called on Brazilians to re-elect Bolsonaro, “a great guy” and not especially “Lulu (sic), this crackpot of the extreme left.”

But Bolsonaro, a former metal worker with an unusual destiny, hoped he would “have a moment of wisdom” and “accept the result” if he loses.

Accusing each other of lying, Bolsonaro, and to a lesser extent Lula, fueled a disinformation machine like never before in Brazil.

Social networks – the sole source of information for the majority of the 170 million Brazilian users – have reported unprecedented levels of misinformation.

Through this vicious campaign, the real concerns of the people have been ignored: inflation, unemployment, poverty or hunger, from which 33 million Brazilians suffer.

See also  'Let us be the nation we know we can be': Biden speaks after defeating Trump - US Election 2020 Live Updates | American News

The main issue between the two rounds is hunting down the 32 million 1st round dropouts (21%). By comparison, Lula had a lead of six million votes on October 2.

Lula wanted to preserve democracy and make “Brazil happy” again, and after two terms he lifted nearly 30 million Brazilians out of poverty, but the economy was booming.

Despite the mandate etched by acute crises including Covid, he has maintained an undiminished base of supporters and has managed to impose his political course against the barely audible left and traditional right.

If elected, Lula, a key figure in Brazilian politics for four decades, will make a spectacular comeback (2018-2019) after suffering disgrace in prison.

The next tenant of Planaldo Palace in Brasilia will govern with an even more right-wing parliament after legislative elections on October 2: Bolsonaro’s Liberal Party (PL) remains in power.