Home World Brazil: In Copacabana, voters are divided over the Catholic Church 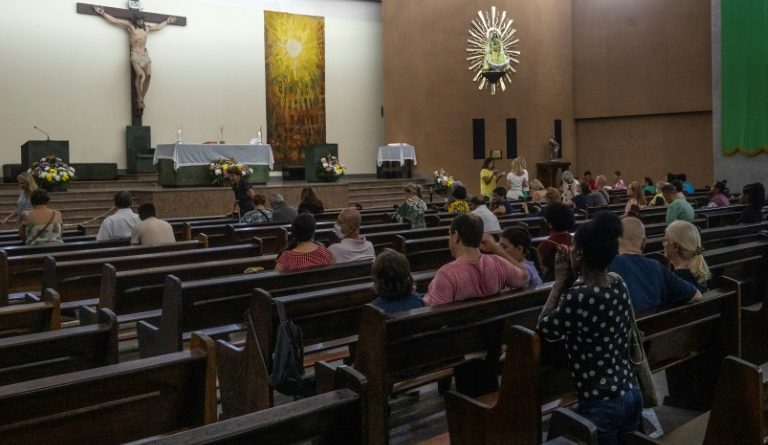 “True Christians vote for Lula! A voter for the former president shouted at a supporter of outgoing president Jair Bolsonaro at the door of a Catholic church in Rio de Janeiro, whose annex has been converted into a polling station.

The atmosphere in this church in the Copacabana district was electric at the end of mass this Sunday, the day Brazilians will be called to the polls to decide the icon of the leftist Luiz Inacio Lula da Silva and the far-right president.

Joana de Arco Perina, an activist in Lula’s political family, the Workers’ Party (PT), is a devout Catholic and blushes when she hears Elizabeth de Sousa defend Bolsonaro, who has “ruined everything”.

“A pact between Lula and the devil! Bolsonaro was sent by God to save us! A rallying sign of the Bolsonarians with the slogan “My Party Brazil” opposes Elizabeth de Sousa wearing a yellow and green T-shirt, the colors of the national flag.

Also a Catholic, the 69-year-old retiree says a “battle of good against evil” is being waged this election day. Outgoing President Michelle Bolsonaro’s speech is a devout evangelical.

Religion is at the center of this highly polarized campaign in a country where 215 million people are predominantly Catholic and a third belong to evangelical Protestant churches.

Evangelicals support Bolsonaro and the Catholic Lula, but candidates have made more gestures toward both groups in the final stretch of the campaign.

“For me, the family is sacred,” Lula said during a meeting with evangelical leaders last week.

But recent efforts by the former unionist to appeal to loyalists have not convinced 41-year-old Edval Máximo, who turned out to vote for Jair Bolsonaro.

“I never heard Lula talk about the word of God. Only now is he in the countryside, talking about it,” said the pale green-eyed man, originally from the northeast, who guards a building in the neighborhood.

“Leftists and communists, they hate religion,” he adds.

Almost 60% of people questioned by the Datafolha Institute believe that the issue of religion is decisive in their choice.

A recent poll by the same firm indicated that this factor weighed heavily among Bolsonaro voters.

“I am against abortion. I’m voting for someone who protects the family: Myth,” said Magali Zimmerman, 67, who uses the outgoing president’s pen name.

But religion alone did not weigh on his will. “I love Copacabana, but I’m afraid to go on the street because of thieves,” says a resident of this well-known and touristy area, home to many retirees.

“Bolsonaro is not perfect, but he will bring us security”, supports this widow.

Eduardo Jorge, at the back of the church, sways, waves his hands in the air, and sings praises to God. He was one of the few in the yellow-and-green crowd wearing a red PT shirt.

“I believe in a redistributive God,” this voter of Lula maintains at the mass conclusion. “The Bolsonaros are using trust to protect their interests rather than the poor. We need a Brazil that offers opportunities again and doesn’t exclude people,” said the 53-year-old social worker.

Her Brazilian flag earrings make it clear who Esther Ferreira is leaning towards. “Without hesitation”, he will vote for former paratrooper Bolsonaro, but above all he hates the left.

Wilson Rodriguez Santos has a colorful tattoo of Jesus on his forearm. But this voter for Lula assures the former metal worker that religion was not the driving force behind his decision to vote.

“Everything was a disaster under Bolsonaro. Education, health, public service… everything needs Lula to come back,” he adds.