Home World HM The King’s Ambassador to the audience by the President of Guinea-Bissau, Mr. Nasser Bourida welcomed. 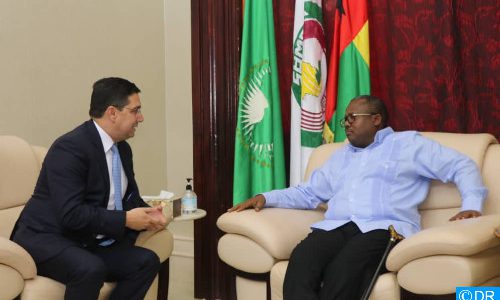 The President of the Republic of Bissau- Guinea-Bissau, Mr. Umaro Sissoko Mbalo, who met with visitors at the Presidential Palace in Pisa on Friday, was accompanied by the Minister of Foreign Affairs, African Cooperation and the Moroccan Ambassador to Abroad, Mr. of His Majesty King Mohammed VI.

At the end of this audience, Mr. Bourita noted that he sent the message to the President of Bissau-Guinea that the ties between the two countries are strengthening and “already very strong”. Since the sovereign’s visit to Pisa in 2015.

The minister indicated that he congratulated President Mbalo and Bissau-Guinea diplomacy on the occasion for the victory of the presidency of the Economic Community of West African States (ECOWAS), thanks to this action, Guinea-Bissau “works. Way” in many regions and in many regional and international issues in the ECOWAS region and beyond.

Ambassador-Director General of the Moroccan Agency for International Cooperation (AMCI) Mr. Mohamed Metkal and Chargé d’Affaires at the Embassy of the Kingdom of Morocco Mr. Babana El Alaoui Mohamed Salah was present in the audience. Republic of Guinea-Bissau.

Earlier, with the Minister of Foreign Affairs and Communities of Guinea-Bissau, Mrs. Suzy Carla Barbosa, Mr. Purita met each other.