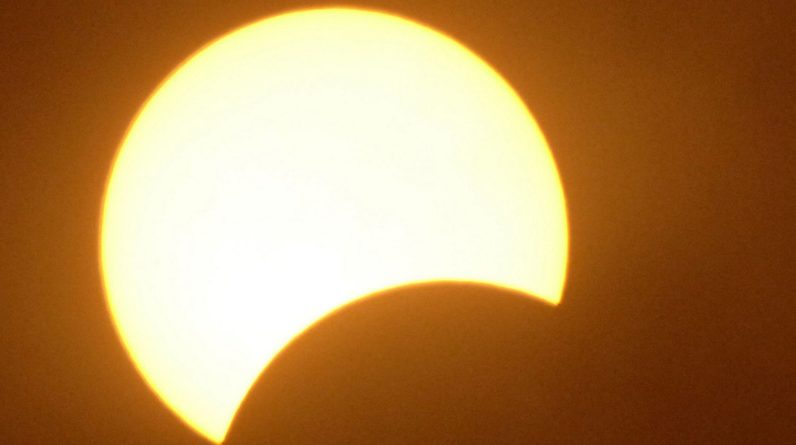 Sun has a date with Moon. On Tuesday, a partial eclipse will cross much of the Northern Hemisphere, from Iceland to India and France. For about two hours, the moon will partially cover the sun, but not enough to completely darken the sky.

According to French Space Mechanics and Computation of Ephemeris (IMCCE) of the Paris Observatory, The event will begin in Iceland on Tuesday morning and end in India in the afternoon, crossing Europe, Northeast Africa and the Middle East.

For an eclipse to be complete and plunge us into complete darkness, the moon’s shadow must touch the Earth’s surface. That won’t be the case this time. “It is impossible anywhere on the surface of the earth to see the total eclipse of the sun”The Paris lab confirms In a press release.

During the maximum eclipse, the Sun will be 82.2% obscured in Kazakhstan. “But the understanding of darkness is still insufficient” In broad daylight, said AFP Florent Delefly, an astronomer at the Astronomical Observatory. Because “You need at least 95% sunlight coverage to start feeling like darkness in the sky, a kind of cool light.”He adds.

In France, the eclipse will be less than 20%. It will start at 11:15 am in the north of the country, 11:30 am in the south and end at 1:00 pm. According to the Paris Observatory, since City of Strasbourg That eclipse is very visible. To avoid burns to the eyes, the sun star can be seen only on condition that the sky is clear by looking at it with adapted and new glasses. The use of instruments such as telescopes or telescopes with filters is also possible in centers that organize observations.

Tuesday will be the 16th partial solar eclipse of the 21st century. In France, the last partial eclipse begins on June 10, 2021. On August 12, 2026, a new eclipse will occur in many parts of the world. But not in France, where the dimming of the solar disk is 92% from Paris and 96% from Marseille, according to the IMCCE.