Home Science Martian lakes may have been larger than previously thought 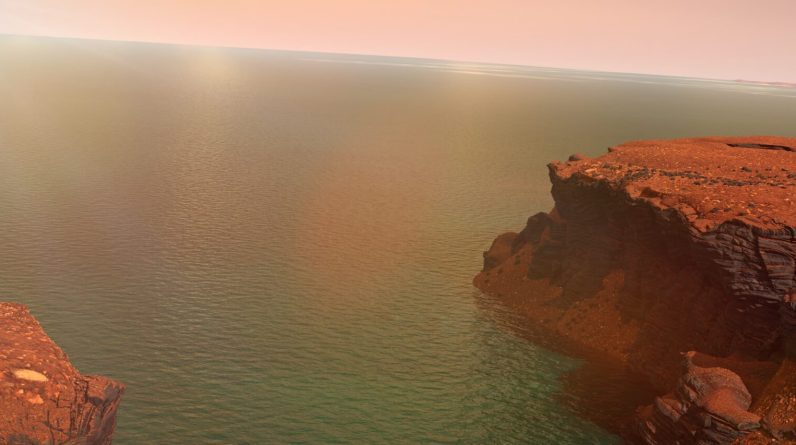 Martian lakes and the presence of water on the Red Planet

If the Red Planet appears to be a dry desert, often swept by violent dust storms, the existence of ancient Martian lakes is beyond doubt. Still it is wrong to say that there is no water on Mars. The water that still exists on the planet today is in the form of ice sheets a few kilometers thick at the North Pole. and in the form of water vapor in the Martian atmosphere. Mars lacks liquid water due to the average temperature approaching -60°C and the extremely low atmospheric pressure estimated at six hectopascals.

The Red planet It has never been a desert. In the 1970s, American explorers Mariner and Viking took photographs of deep, winding canyons that resembled water flow channels that formed vast networks. Most recently, NASA’s Pathfinder lander, which touched down on Mars on July 4, 1997, photographed rock blocks carried by strong water currents.

Liquid water on Mars dates back 4.5 billion years, as it could on Earth. During this time, intense volcanic activity creates a dense atmosphere rich in carbon dioxide. Under such conditions, the planet’s temperature would be above 0°C, allowing for the existence of liquid water.

Scientists know about 500 ancient lakes on the Red Planet. A team of researchers from the University of Hong Kong analyzed a vast amount of data from satellite observations of Mars over many years. They realized that these lakes were actually more numerous.

The surface of Mars is riven with canyons, allowing us to imagine real streams. Credits: SciePro/Shutterstock.

Most of these known ancient Martian lakes are larger than 100 square kilometers. On Earth, large lakes occupy a very small surface area. Starting from this idea, researchers estimate that there must have been lakes on Mars, that is, from 3.5 to 4 billion years ago, at least 70% of small Martian lakes, traces of which have not yet been found. .

All lakes on Mars have been absent for a very long time. Some were only geologically short-lived, ranging from 10,000 years to 100,000 years. Thanks to this information, researchers estimate that Mars experienced periods of episodic warming.

Another observation of the researchers: due to the very weak gravity on the red planet and the presence of dusty land, the water of Martian lakes should have been permanently cloudy. This is Turbulence Sunlight had to be prevented from penetrating deeply, an obstacle to the establishment of a viable photosynthetic life.

Not all Martian lakes are created equal

Not all lakes on the Red Planet were created equal. Some of them existed for a very long time, were larger than others, more deep and provided different types of environments. For example, some lakes must have hydrothermal systems Hydrothermal vents Land located at the bottom of the oceans and a source of rich growth of life.

Remaining traces of these Martian lakes should be explored in future Mars missions. The existence of lakes on Earth with very different environments and conditions will allow the development of techniques and tools for a future Mars. Among these tools, it seems useful to try to develop systems to detect traces of bacterial life.

If that happens, many questions remain about the possible evolution of microbial life on Mars in lakes. In particular, the planet is subject to temporary warm climates.

See also  Earth is burning: Here's an impressive evolution of temperature since 1880 (video)

These traces of Martian lakes will provide valuable information for understanding the geology and geobiology of Earth’s water in the Archean. It is the second geologic epoch of the Precambrian that lasted from 3.85 billion to 2.5 billion years ago.

read more: What to remember from the Curiosity mission after ten years on Mars