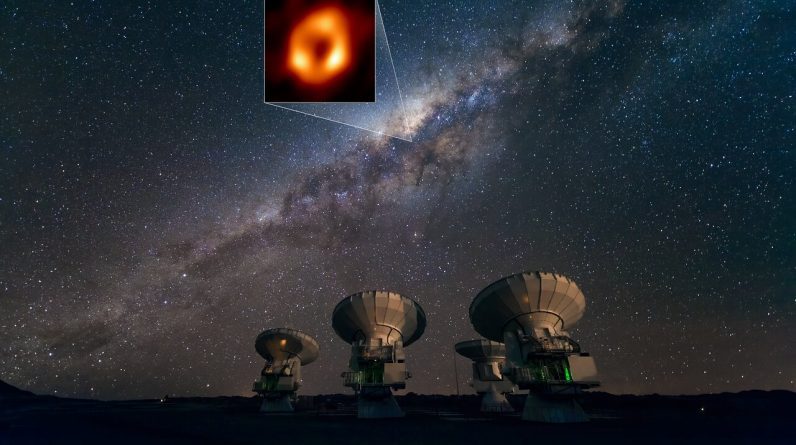 A bubble of extremely hot gas detected by ALMA’s antennas

This gas bubble, which caught the attention of astronomers, was detected by ALMA as a burst of X-rays from the heart of the galaxy. The Atacama Large Millimeter/Submillimeter Array, or ALMA, is a vast network of antennas installed on the Sajnador Plateau, more than 5000 meters above sea level in Chile. This inhospitable location, which rarely receives rain, is an ideal location for this type of astronomical study. The absence of moisture and water vapor in the atmosphere preserves valuable radiation at sub-millimeter wavelengths.

Alma A far cry from classic binoculars. It is an instrument made up of an array of 66 antennas set up in the Chilean Andes and spaced up to 16 km apart. This instrument of unparalleled precision is designed to study the radiation produced by the coldest celestial bodies in the universe. It is radiation with a wavelength of the order of a millimeter that lies between infrared radiation and radio waves.

A network of radio telescopes only in 2017 Event Horizon Telescope (EHT) begins observations with the aim of creating a picture of the black hole that has been predicted for years, using interferometry techniques. In May 2022, the first image of Sagittarius A* was released to the world. The monster at the center of our galaxy is a supermassive black hole with an estimated mass of 4 million solar masses.

read more: WORLD PREMIERE: Here’s an incredible image of Sagittarius A*, the black hole at the center of the Milky Way!

A strange gas bubble that rotates faster than light

This bubble of hot gas orbits Sagittarius A* at 30% the speed of light. Credit: European Southern Observatory (ESO)/YouTube

Sagittarius A *, located 27,000 light-years from Earth, is very quiet compared to the most active supermassive black holes, which “eat” enormous amounts of matter every second and therefore emit large amounts of radiation. So by chance, while collecting data, astronomers discovered this bubble of gas. Moments before it was detected by ALMA, the Chandra Space Telescope detected very strong X-ray emission from the center of the Milky Way. Astronomers observed this burst of X-rays for a relatively short period of 90 minutes in April 2017.

During this hour and a half, they were able to calculate that this bubble of gas made a complete circle of the black hole. Sagittarius A* In just 70 minutes. This bubble of gas orbits the black hole at a speed that defies comprehension as it travels 300,000 kilometers per second, 30% faster than the speed of light.

Such emissions have been observed before, but at different wavelengths. These flashes of matter are already associated with bubbles of hot gas orbiting black holes at very high speeds. What is new about the bubble of gas surrounding Sagittarius A* is that it is detectable by radio waves.

An eruption with a magnetic appearance

Astronomers believe that the burst is the result of interactions between extremely hot gases and the magnetic field.

This bubble of gas, or hot spot, astronomers say produces very strong polarized light radiation and exhibits the signature of synchrotron radiation. It is electromagnetic radiation produced by charged particles moving and deflecting within a magnetic field. Astronomers have long assumed that this type of flash comes from this type of interaction of extremely hot gas with a magnetic field. Thanks to this discovery, they found the “material” source of this phenomenon.

As for radio wave detection, this may be the result of the cooling of the gas bubble after the flash of X-rays is “spitted out” and thus visible at longer wavelengths.

To refine their observations, the astronomers used a theoretical model to learn more about the formation of this hot gas bubble, but also about the magnetic environment in which it formed.

See also  This Tuesday is an exceptional event in the sky: you need to know to notice it

Scientists aren’t going to stop there, they hope that one day the EHT instrument will be able to directly observe the gas masses in orbit.

read more: A “spooky” object with improbable behavior discovered in our galaxy