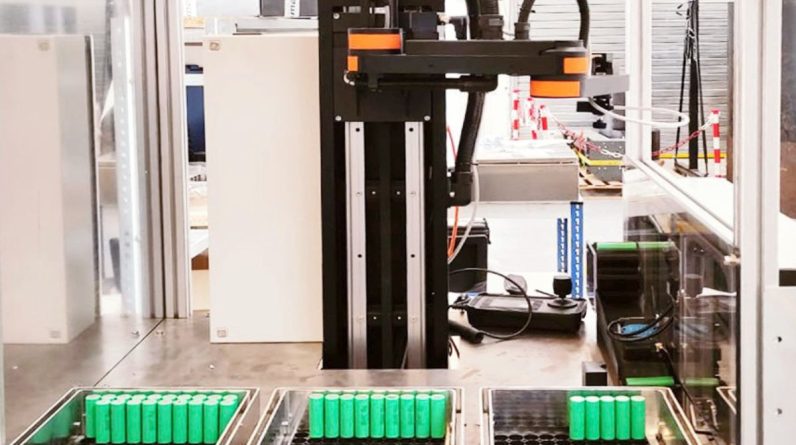 By automatically sorting used cells, this machine will facilitate the production of second-life batteries. Currently in prototype stage, the robot promises to produce batteries that are cheaper for the wallet and the environment.

The Household batteries Even more expensive for individuals. Although Many benefits The investment in this electricity storage system is rarely profitable. However, there is a much cheaper and more environmentally friendly way to obtain a battery: make it yourself from used cells.

Highly experienced craftsmen It is already possible to produce their own second-life batteries for a few hundred euros. They recover cells extracted from devices destined for garbage: most often laptops and wireless devices. Collection is done manuallyElectronics stores and voluntary deposit terminals.

Read more
He builds his own solar power plant with a battery for 4,000 euros

These enthusiasts have to go through the long and arduous process of sorting cells. Most of the collected cells are disordered and can no longer supply current. To detect worn-out cells that are still functional, You should test them one by one.

Voltage Measurement, Charging and Discharging Tests: Each battery goes through a test bench that is completely “by hand” before being assembled into a new battery. Beware of Errors: A defective cell that inadvertently passes through the filter Security can be compromised and battery performance.

In the future, this important step can be significantly simplified and made more reliable. A small machine dedicated exclusively to sorting used cells has been released in the United Kingdom. It was designed by three British companies: Aceleron, Innvotek and MEV, with the help of Brunel University’s Innovation Centre.

The prototype fits into a small cabin, in which one hand handles the cells and conducts experiments in complete autonomy. According to Acceleron, which is currently configured to only hold cells above 70% health. However, depending on customer requirements, other degradation levels can be selected.

Soon installed in workshops accessible to all?

We can imagine such a machine equipped “Fab Labs”, these common workshops or “manufacturers” (artisans or creators in French) could use more advanced tools to carry out their projects. An individual or professional who wishes to make his own battery can deposit his old cells collected there to restore only compliance with his chosen specifications, without the risk of mishandling.

In addition to their very low cost, or their free use, used cells make it possible to produce batteries that are more environmentally friendly than new models. Old cells that are still in operation are saved from landfill or recycling, It consumes a lot of energy. They also store lithium, along with other strategic materials for energy conversion, whose resources are provided Uncertain in the long term.

Read more
Battery recycling: our visit to the heart of a French factory

A substantial deposit of used cells

“The battery of the average electric car uses More than 3,000 individual cells. By the time this battery reaches its end of life, we estimate that at least half of the cells will be in a state of health greater than 80%. Ensures acceleration.

More than one million electric cars currently in circulation in France (not counting hybrid models, which also include a battery) Up to 230 million worldwide by 2030Added to tens of thousands of wireless objects, the deposit of used cells is absolutely massive.