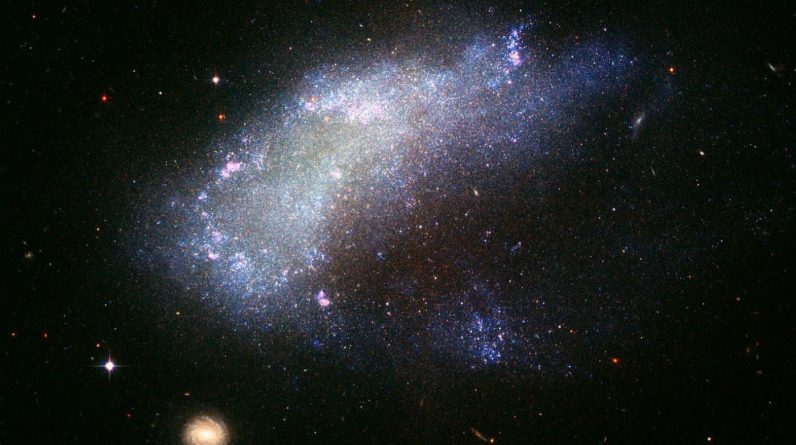 A recent study by an international team of astronomers Galaxies Fourno Cluster’s Standard Model to test the ΛCDM (or Lambda CDM) model – which describes the universe as homogeneous and isotropic, consisting of ordinary matter, dark matter and dark energy – and modified Newtonian dynamics (or MOND), a controversial alternative to general relativity. They found disturbances within the cluster’s dwarf galaxies, suggesting a different theory of gravity.

Most astronomers believe that the mysterious dark matter underlying the ΛCDM model is the only way to account for certain phenomena such as the masses and velocities of galaxies or their mergers. This standard model of cosmology assumes that most galaxies are surrounded by a halo of dark matter particles, capable of exerting a strong gravitational pull on nearby objects. Despite decades of research, the existence of dark matter has not been proven and various alternative theories have been proposed.

One of them is the Modified Newtonian Mechanics (or MOND theory) theory. To test these different models, a team of astronomers was interested in the dwarf galaxies of the Forno cluster, located about 62 million light-years from Earth. Dwarf galaxies are small, faint galaxies that are often located inside or near larger galaxies or clusters. Because of their low surface luminosities, they are particularly sensitive to tidal forces generated by more massive galaxies; They are therefore perfect probes to test theories of gravity.

” We present a novel way to test the standard model based on the extent to which dwarf galaxies are perturbed by “gravitational waves” from nearby massive galaxies. “, explains in A statement Elena Asensio, a PhD student at the University of Bonn and first author of the study reporting the findings. The amount of perturbation expected for these galaxies depends on the gravitational law and the presence or absence of dark matter.

See also  Why it is important for science - science and information technology - tsn.ua.

Observations suggest that many of the cluster’s dwarf galaxies have undergone severe decay. However, this is in stark contrast to the standard model because, in theory, the dark matter halo of dwarf galaxies should partially shield them from the tidal forces generated by the surrounding galaxy cluster.

The team first looked at the size of the perturbation expected from dwarfs: this can be determined by their internal properties and their distance from the cluster’s powerful center of gravity. For example, massive galaxies with low stellar masses, as well as galaxies near the cluster center, are more easily disturbed or destroyed. The researchers compared their results with the size of the disturbance seen in images taken by the European Southern Observatory’s Very Large Telescope. This is where a contradiction arose.

” If one wants to explain the observations with the standard model, the comparison shows that the dwarfs of the Forno cluster should already be destroyed by the gravitational pull of the cluster’s core, even if the waves it wakes up in the dwarf are 64 times weaker. Than the dwarf’s gravity! “, explains Elena Asencio. The scientist points out that this observation is not only counter-intuitive, but contradicts many studies that show that external force is necessary to destabilize. Galaxy The dwarf is roughly equal to its own gravity.

If these dwarf galaxies do not have dark matter halos, how did they form? After all, how could they resist against the surrounding gravitational forces? Since the Standard Model was not suitable to explain the observed phenomenon, the team used another theory, the MOND theory, which is based on a modification of Newton’s second law (which relates the mass of an object and the acceleration it would receive if forces were applied to it). This eliminates the existence of a dark matter halo, but provides a correction that gravity is “raised” at very low accelerations.

This method turned out to be very consistent. ” Our results show a remarkable agreement between observations and MOND expectations for the perturbation state of reactor dwarfs. Dr Indranil Panik, a researcher at the University of St Andrews and co-author of the study, said.

The team points out that this is not the first time a study testing the influence of dark matter on the dynamics and evolution of galaxies has challenged theory. ” The number of publications showing inconsistencies between observations and dark matter paradigms continues to increase every year. It’s time to start investing more resources in more promising theories Dr. Pavel Kruba, head of the Stellar Population and Stellar Dynamics Research Group at the University of Bonn, said.

These results obviously have major implications for fundamental physics. The team continues its investigations and expects to find other, more chaotic dwarf galaxies in other galaxy clusters, inviting other research groups to explore this avenue.