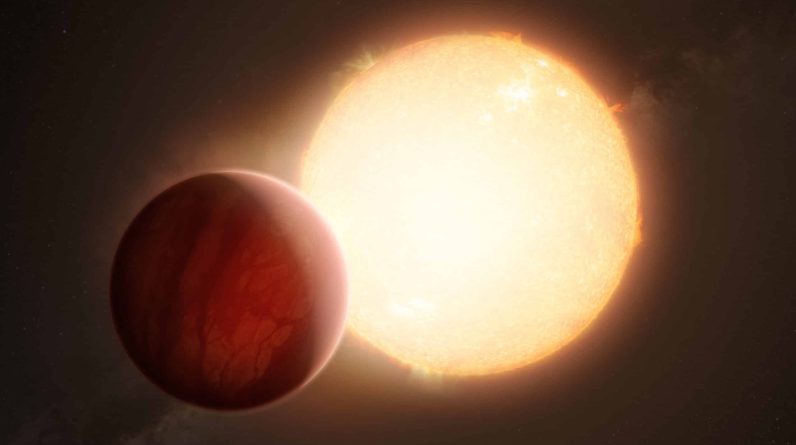 The exoplanets WASP-76 b and WASP-121 b have fascinated astronomers since their discovery three years ago. Rightly qualified as “exotic exoplanets,” these two super-hot Jupiter-type giants are the sites of astonishing phenomena, and still contain their share of surprises. Routine observations by ESO’s Very Large Telescope (VLT) recently (accidentally) revealed the presence of barium in their upper atmosphere. The discovery is puzzling because it is the largest chemical element ever detected in an exoplanet’s atmosphere, an element expected to be present deep in the gas layers.

WASP-76 b and WASP-121 b, 640 respectively light years and 855 light-years from Earth, the most fascinating exoplanets ever studied. Called Jupiter because of their size and gaseous state, they are characterized by temperatures exceeding 1000°C at night and reaching 2400°C during the day. These temperatures are particularly pronounced in proximity to their host stars.

This closeness also means that many fascinating events take place between them. WASP-76 b, for example, is “gravitationally locked,” meaning that the period of rotation on its axis is equal to the period of its rotation, which is only one to two days. This coherence effect means that its star always has the same face, a surface that receives thousands of times more radiation than Earth receives from the Sun.

The temperature difference between the night and day faces leads to very strong winds, as well as fragmentation of molecules and evaporation of metals. This set of events leads to a difference in surface chemistry during day and night.

Thanks to old observations from a new optical instrument called ESPRESSO, recently acquired by the VLT, astronomers have discovered a strong signature of iron vapor in the twilight of WASP-76 b. But strangely, no metal vapor would have been detected at dawn on the planet. Some of this iron vapor is blown toward the night side of the planet as a result of its rotation and atmospheric circulation. Being in a low temperature environment, Water vapor condenses and falls as rain.

Astronomers were surprised to find barium so high in the atmospheres of two exoplanets. Heavier than iron, it is unexpected to find this element in the upper atmosphere, and it is surprising that it does not rain on surfaces like iron.

” It was an accidental discovery », Explain Azevedo Silva, lead author of the new study, is a doctoral student at the University of Porto and the Ciências do Espaço (Portugal) Institute of Astrophysics. ” We didn’t specifically expect or look for barium, and had to verify that it came from the planet, since it has never been detected in an exoplanet before. », He adds.

An unexpected and still unexplained phenomenon

The atmospheric composition of the two exoplanets was analyzed by the light they emit. The VLT was able to detect several elements, including barium, that raise questions that had not been explored before. This element is actually 2.5 times heavier than iron, and given the gravity of the planets, we would expect to find it in the lower layers of their atmospheres.

On Earth, barium is sometimes found at high altitudes, but in small amounts. This is especially the case immediately after the firecracker explodes (especially when it emits green lights). As for the barium detected in WASP-76 b and WASP-121 b, the natural mechanisms that allow it to be so abundant in the atmosphere are still a mystery.

The results of the new study, described in the journal Astronomy & Astrophysics, demonstrate how diverse exoplanets are, and what happens on them is still largely misunderstood. To explain the presence of barium in WASP-76 b and WASP-121 b, the researchers are optimistic because ” Being gaseous and hot, their atmospheres are much larger and therefore easier to observe and study than smaller or cooler planets. », assesses Olivier Demangeon, co-lead author and researcher at the University of Porto and Ciências do Espaço.