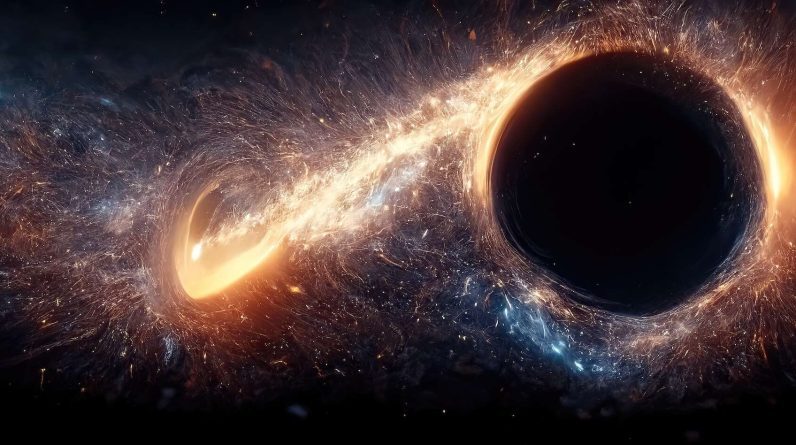 In the menu of black holes, stars are not very rare. It’s a little rarer for a black hole to have some notes at the end of its meal, and the same is true. The undigested material is then excreted around it. But this time, it’s actually something unique — so far — astronomers have noticed.

A shredded star is then engulfed by a black hole. It is part of the everyday life of an astronomer who is interested in the habits of these space monsters. Or almost. So when the researchers told the story about it black hole It engulfed an ordinary star in a galaxy about 665 million light-years from Earth that really didn’t attract anyone’s attention. That was in October 2018.

But today the black hole is being talked about again. Again lighting up the sky. Although he hadn’t swallowed anything new in over three years. After a spicy meal in 2018, the black hole just exploded! “We were surprised. No one had seen it before.”Yvette Cendes explains, Researcher at Harvard-Smithsonian Center for Astrophysics (USA), A contacted.

Before continuing let’s mention that when a star rubs close to a black hole, the gravitational forces exerted by the monster will begin to stretch it. As it orbits the black hole, theThe star turned out to be spaghetti, heats up, eventually causing what astronomers call a tidal breakdown event (TDE). It is signaled by a flash of light that researchers can observe from millions of light years away. Their discovery in 2018 was named AT2018hyz. It was emitted in a visible space for several months before disappearing.

This is done by browsing the VLA’s radio data (A very large arrayAstronomers discovered that the black hole mysteriously revived in June 2021. In the rush of this unprecedented event, they requested time to observe. Many telescopes. “All our requests were readily accepted”Yvette Cendez reports.

AT2018hyz has been broadcasting radio signal well for three years. Like other TDEs observed in the last ten years. But suddenly the signal got stronger. Today, AT2018hyz appears to be the brightest wave breaking event ever observed in the radio field. Astronomers know that spaghetti ingredients are sometimes sent back into space. In the form of a burp. Like a black hole can’t swallow everything it tries to swallow. But this usually happens soon after TDE. Not three years later. Not at the speed at which the observed event occurs at this time: 50% at the speed of light vs. 10% for other decay events. Wave effect.

It now remains to be determined whether this black hole is truly an exception or whether astronomers have simply been so far… TDEs have been overlooked so late in their evolution!