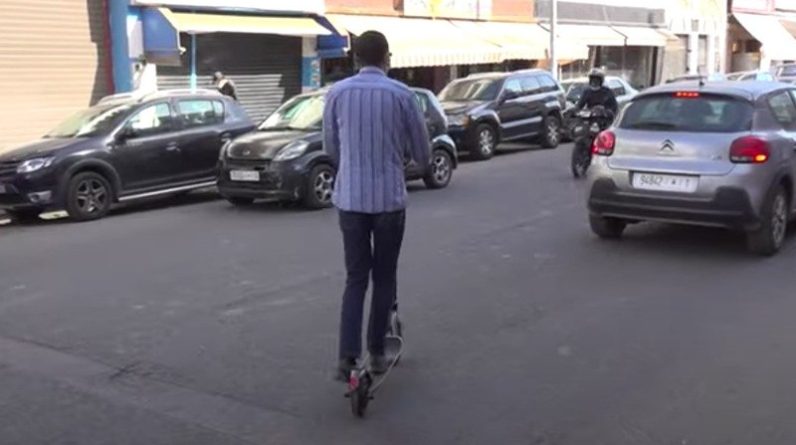 The electric scooter, which appeared a few years ago on the congested roads of Europe (Paris, London, Brussels, Madrid, Berlin and others), is a new means of transport that combines urban mobility and so-called respect for the environment. Urban roads are often eaten by moths and are not very conducive to this practice, which is a modern mode of transportation.

Traffic jams are a “way of life” and if the example of the kingdom’s metropolises dominate rush hour, it is clear that many people have swapped their vehicles for electric scooters. In exchange between us, they lose nothing, on the contrary. Let’s see! Our fellow citizens are increasingly involved in electric scooters, means of transport, “environmental and economical” that allow our city dwellers to move around, while avoiding traffic jams, parking … resulting in significant time and cost savings. Money, knowing that this is precisely time, is as precious a commodity as money.

However, the only concern of this movement in modern times is that the electric scooter is currently not subject to any legal framework that regulates its use and clarifies the rights and obligations to ensure the safety of users and third parties.

In short, there is no insurance contract for these machines. But rest assured, the “Note of Consent” proposal regarding scooters and electric bicycles should see the light of day very soon. In fact, these motorized transport vehicles, known as Personal Motorized Transport Vehicles (EDPM), are considered vehicles that can use the streets and roads in the same way as a motorcycle or a car. Clearly, these vehicles, if approved for circulation, must obtain an approval and be subject to the same insurance regime as regular vehicles.

There is no doubt that the use of electric scooters is increasing exponentially day by day. This type of machine cannot be too blunt, so the urgency of a legal framework that defines everyone’s duties and obligations is only within the user’s security framework.

For this, last July, the Transport Department sent a letter to the Customs and Excise Department. Transport and Logistics Minister Mohammad Abdeljalil said in his statement that his department is hard at work preparing for a “Memorandum of Consent” related to scooters and electric bicycles. The goal is to classify electric scooters and set traffic rules to allow safe use of these vehicles on public roads.Other modes of transport» In import.

The creation of regulations makes it possible to fight against dangerous behavior and to move these machines to a responsible and safe use, protecting sidewalks and pedestrians, especially the most vulnerable: the elderly, children and people with mobility. In Europe, for example, electric scooters must be limited to a speed of 25 km/h, must have a front and rear light and horn, must be operated with reflective clothing and the use of helmets (phones or music) is prohibited. Driving.

Also, the future regulations should be based on the definition of traffic rules in the city and outside the “approved reference system” regarding electric scooters and bicycles in Morocco, focusing in particular on the authorized speed, the obligation to wear a helmet and safety. equipment, ban on public transport and minimum age limit for driving these machines. This should be the official legal framework for road safety purposes for the increasingly widespread use of electric scooters and bicycles in the Moroccan urban landscape.

In France, for example, twenty-four people died in 2021 from scooter accidents, and at least 6,000 were injured on balance. And it didn’t get any better. Since the beginning of 2022, around fifteen fatal accidents involving scooters have been observed in the month of July. In Morocco, where the first physical victims of accidents are pedestrians and cyclists, the regulatory platform is expected in the first quarter of 2022, aiming to prevent the dangerous behavior that is routinely observed.

Currently, there is a considerable delay in this regulation, which should encourage drivers to practice responsible and safe use of these machines, since an electric scooter is a motorized means of transport that can go beyond 50 km/h. It should be virtuous to respect the highway code. Additionally, the insurance attached to the fact that it is a motor vehicle should cover any damage that may occur.