Home World ‘My place is here’: New US citizens sworn in at Ellis Island 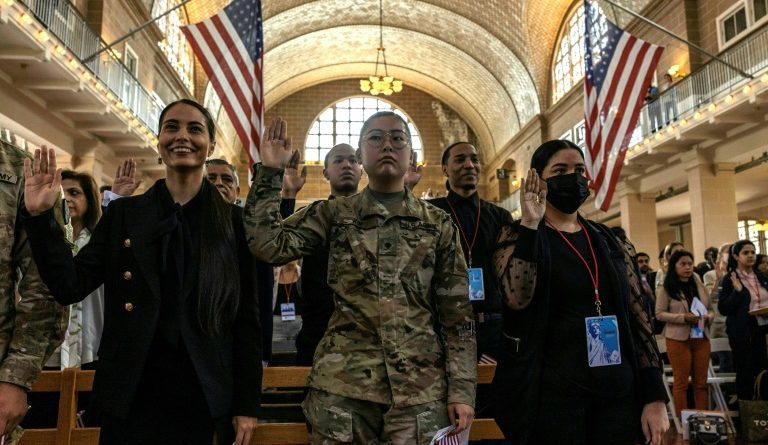 ‘My place is here’: New US citizens sworn in at Ellis Island

Amidst flags and tears, 200 New Yorkers received US citizenship on Saturday, in an extraordinary naturalization ceremony organized on Ellis Island, which welcomes thousands of immigrants every day.

Applicants for citizenship from about 60 countries gathered in the great hall of the former immigration reception center, where some 12 million people entered the United States in the six decades of the early 20th century.

The first such ceremony on the island since 2016 marks the anniversary of the signing of the Constitution in 1787 and kicks off the annual ‘Citizenship Week’.

According to the U.S. Citizenship and Immigration Services, 200 of the 19,000 new U.S. citizens will be sworn in this week across the country.

As the sun’s rays broke through the tall arched windows, less than a mile from the Statue of Liberty, the emotion was palpable throughout the room as the Confederates pledged their allegiance to the United States.

Attorney General Merrick Garland, who presides over the ceremony, urges the new American citizens: “This country – your country – welcomes you wholeheartedly. »

While recounting his own parents fleeing religious persecution in Eastern Europe, Mr. Garland blinks back tears and says two of her grandmother’s siblings died in the Holocaust.

“I often wonder how my family members felt when they entered buildings like this,” he says. “I often think about what their decisions mean for my own life. »

Before the ceremony, Lovell Brown, 31, from Jamaica, told AFP it was his first time visiting the island and he was looking forward to “such a great moment”.

“I feel like I’m really a part of America now,” observes the teacher, who came to the country at age 17.

While the ceremony takes place in the United States, the arrival of undocumented immigrants maintains an atmosphere of increasingly politicized controversy.

At a ceremony at Ellis Island, Mr. Garland said, “Overcoming the current polarization of our public life is, and will continue to be, a difficult task. “But we cannot overcome it by ignoring it. »

According to a recent report from the Department of Homeland Security, 814,000 people became US citizens in 2021, or 30% more than in 2020, as the Covid-19 pandemic paralyzed much of public life.

Umaru Kabir Ahmed, 63, from Nigeria, has lived in the United States since 1989.

The Bronx resident, who works in a nursing home, says she first applied for naturalization in 2012.

“I’m happy,” he says, adding that his new documents reflect the American spirit he’s cultivated over the past three decades.

The ancestors of about 40% of today’s Americans passed through Ellis Island, which opened in 1892 and today houses a museum.

At its height in the early 20th century, thousands of people passed through it daily, waiting in long lines for medical and legal examinations, which sometimes led to family separation or deportation.

Icon of the place Warren Lawson, 44, who has been in the US since 2016, is not happy to be on the island “to learn the history and see it for himself”.

Obtaining nationality was necessary for her because “it’s probably where my children will live for the rest of their lives, and I want to grow old like them. »