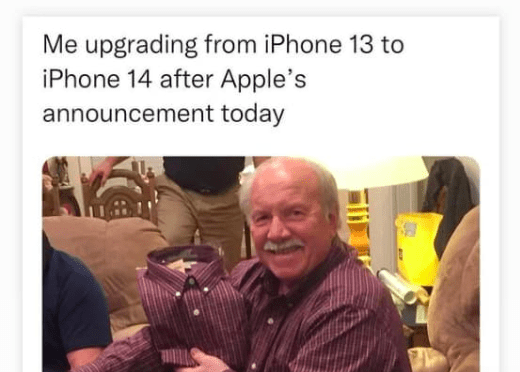 On her Instagram account, Steve Jobs’ youngest daughter shared a meme mocking the low-end innovation of the latest iPhone. A serious blow to Apple’s brand image?

It’s a funny memory that follows with every release of a new iPhone (or every version of the Fifa video game): a photo of a man proudly unbuttoning his new shirt. There’s something to laugh about in the release, with the tag line “Upgrading from iPhone 13 to iPhone 14.”

But at Apple headquarters, we might have been horrified to learn that the youngest daughter of Steve Jobs, the hallowed guru of American business, shared this joke. Perhaps less a critique of his father’s legacy than a simple smartphone consumer joke, the release still made the rounds of the planet, with Apple unveiling its usual mass of new iPhone 14 features.

These include a new camera, longer battery and emergency call capability.

This year’s event is being watched closely by geeks eager to get a glimpse of the tech toy, but investors are trying to predict whether the upgrades will be impressive enough to spark a wave of buying.

Also, before being shared by Eve Jobs, the popular meme was first circulated on investors’ Instagram accounts and parodies of the financial world, such as Wall Street memes.

Eve Jobs, model and horsewoman, usually uses her Instagram account to provide updates on her career, such as a glimpse of her appearance on the cover of Vogue Japan.

Legendary Apple executive Steve Jobs, who oversaw some of the greatest advances in phones and personal computers, died of cancer in 2011 at the age of 56.

See also  That's life After meat-free meat, the new challenge of food culture in the laboratory is breast milk