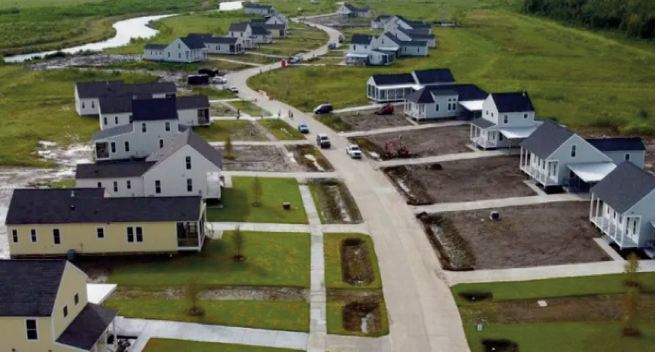 “I can’t wait to go in, I’ve been waiting for this day for an eternity!”, Joan Bourque says in front of her new home, 60 km from the island emerging from the bayou she grew up in, and every day the rising waters threaten a little more.

On this Wednesday in August, a dozen Amerindians who lived on Jean-Charles Island finally get the keys to the homes built for them in Shriver, inland by the Cajuns. They were the first people to receive federal relocation assistance to Louisiana in 2016.
They are also the first climate refugees in the United States.

“The house we had on the island has always been our home. My brothers and sisters and I grew up there, we went to school there,” recalled Joan Bourque, whose family home was completely destroyed.

Their place of escape, Jean-Charles Island, is a square kilometer of confetti. It is populated by descendants of many Amerindian tribes who took refuge there in the 19th century to escape royal persecution.

But global warming has turned the island into a symbol of the evil that is devouring Louisiana, erosion.
This southern state is constantly battered by devastating cyclones and sees its coastline inexorably receding.

Ultimately, 37 new homes will house 100 residents of Shriver, or former residents of Jean-Charles Island, thanks to $48 million in federal aid.
Louisiana Democratic Governor John Bel Edwards, who attended the handover, said, “This is the first program of its kind in our nation’s history.

“We’ve already bought houses to move people. But we haven’t moved an entire community because of climate change,” he says.
Since the 1930s, Jean-Charles Island has lost 90% of its surface, explains Alex Kolker, associate professor of the University of Louisiana Marine Consortium.

Jean-Charles Island was already fragile, and climate change “puts it at even greater risk,” he adds, with land-level subsidence, rising waters or an increase in the frequency and intensity of storms.

Last summer, Hurricane Ida hit so hard, it blew off part of the roof of 57-year-old Chris Brunet, who posted a sign outside his home that read: “Climate Change Sucks.”
Wheelchair-bound since adolescence, he lives in a caravan at the foot of the house where he raised his orphaned niece and nephew.

Chris Brunet, who sometimes speaks in old Acadian French with indifference to the dusky mosquitoes, explains that hurricanes are nothing compared to seawater.
“Many trees have died due to salt water intrusion,” he laments.

However, Chris Brunet, deeply attached to the land his family has lived on for five generations, has long stubbornly refused the idea of ​​moving. “No one wants that!” he exclaims.

A few years ago, he finally rallied to the opinion of his tribe’s leader, the Choctaws, who Jean Charles believed was the only way to protect the island’s population, who was increasingly leading the way to deportation.
But those whose houses are still standing are unwilling to abandon the compound altogether.

Bert Naquin, a new resident of Shriver, wants to repaint his family’s house on Jean Charles Island, where he spent his last nights.
When she discovered the bedrooms and bathrooms of her new home, she was stunned. At the age of 64, this is the first time he is the sole owner of his home.

And yet Bert Naquin already speaks wistfully of Jean-Charles Isle. Despite staying at Shriver, she swears, “the island will always be my heart’s home.”