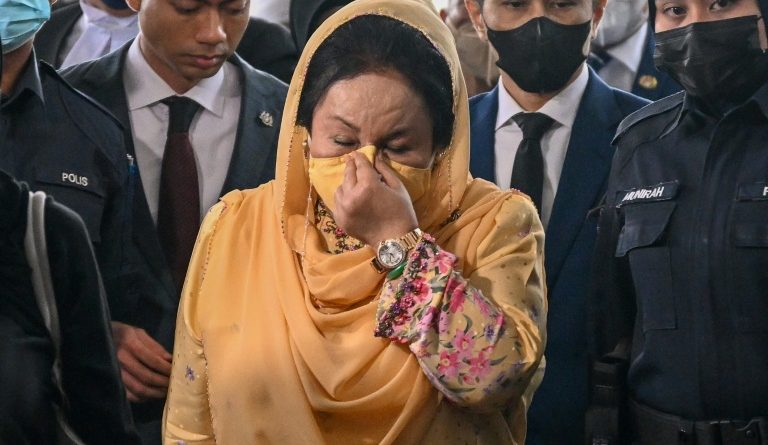 Rosmah Mansor, the wife of former Malaysian Prime Minister Najib Razak, was convicted of corruption and sentenced to 10 years in prison on Thursday, while her husband was jailed for his role in the massive 1MDB financial scandal.

The verdicts mark the end of impunity for the couple, who have long been considered untouchable despite multiple prosecutions and have consistently denied corruption charges against them.

Rosmah Mansor, 70, widely unpopular in the Southeast Asian nation because of her extravagant tastes, has become a symbol of the corruption of Malaysia’s elite.

He sentenced the former first lady to 10 years in prison and a fine of 970 million ringgit (216 million euros).

Rosmah Mansor is accused of demanding 187.5 million ringgit (41.7 million euros) in bribes and 6.5 million ringgit during her husband’s tenure to help a company win a solar power project for rural schools on the Malaysian side of the island of Borneo.

He still faces 17 charges, including tax evasion and money laundering.

Rosma Mansor should appeal and not go to jail immediately.

The daughter of a couple of teachers, she became one of the country’s most powerful women in 2009 when her second husband, Najib Razak, became prime minister.

Two years later, he was heavily criticized when an entire department was created to serve him in the Prime Minister’s administration.

Her penchant for luxury came to light in 2018 when searches turned up more than 500 handbags and around 12,000 pieces of jewelry worth an estimated $270 million.

She was later compared to former Philippine first lady Imelda Marcos, known for her extensive shoe collection, and a target of Malaysian anger over elite corruption.

Police described the seizures at 12 locations for the 1MTP investigation as the largest ever in Malaysia. But Najib Razak kept saying these luxury items were gifts.

She appeared in court on Thursday dressed in a traditional Malay peach-coloured dress and decorated with flowers, and said during the hearing that she was a “victim”.

“My family is affected. Have mercy, have mercy,” she pleaded.

But the prosecution insisted that corruption is “one of the worst ills that afflicts society”, with maximum or near maximum sentences for each count.

Her husband, Najib Razak, who was Malaysia’s prime minister from 2009 to 2018, was jailed nine days before all appeals against the sentence were exhausted.

In 2020, he was sentenced to 12 years in prison and fined 210 million ringgit (47 million euros) in the 1MDB case, as part of a multibillion-dollar, planetary-changing fraud.

The former president, who is still on trial for four other charges, will be sentenced to 20 for abuse of power and 15 for money laundering.

According to analysts, Najib Razak’s imprisonment should derail any plans to return to politics for the former prime minister, who remains highly influential and has many supporters.

The massive 1MDB scandal involving several banks, including Goldman Sachs, and multi-continental investigations contributed heavily to the election defeat of this politician-led coalition in May 2018.

Najib Razak and associates are accused of using money they allegedly embezzled from the 1MDB fund, which was initially created to grow the Malaysian economy, on lavish purchases ranging from real estate to works of art to yachts.