Home Science Dinosaurs may have fallen victim to two asteroids 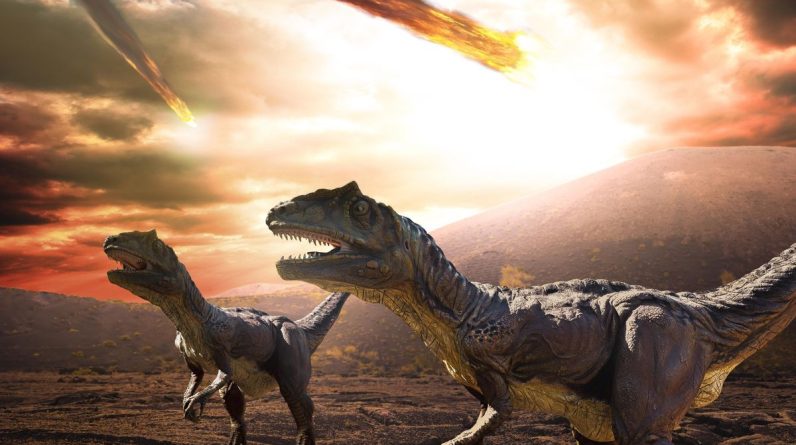 Disaster: Dinosaurs may have fallen victim to two asteroids

Scientists have discovered a new crater in the Atlantic that indicates another giant meteorite hit Mexico around the same time.

The most commonly accepted theory today to explain the disappearance of the dinosaurs is that a meteorite with a diameter of 12 km fell on the Yucatan Peninsula in present-day Mexico. It left a crater 180 km in diameter and caused a catastrophe and a nuclear winter enhanced the species that dominated the Earth.

But according to a new discovery, dinosaurs were actually unlucky because they suffered not one but two giant asteroid impacts. Scientists have discovered a second crater located 350 km off the coast of Guinea and Guinea-Bissau. Called Nadir, after the name of the nearby seabed, the crater is nine kilometers in diameter. ZME Science. It is buried under several hundred meters of sediment, but seismic data revealed its circular structure with a raised rim and a central peak due to the ground rebounding after sinking from the impact.

According to a study published in “Scientific Progress”, the asteroid that caused this crater is 400 meters in diameter, so much smaller than Mexico. Still, it would have caused a huge disaster, as well as a 900 meter high tsunami! British and American scientists, the authors of the study, estimate that this second cataclysm occurred about 66 million years ago (with a margin of error of 500,000 years), or about the same estimate as the Chicxulub impact.

Several explanations have been proposed to explain this “simultaneity”. Some asteroids are accompanied by a small moon, so both would have fallen to Earth, causing a small moon impact on the Atlantic. A second possibility is that this asteroid had already passed close to Earth and was broken into two pieces due to gravity, which then collided with our planet.

A third explanation is an asteroid collision in space, which caused multiple fragments and a heavy meteor shower over a period of time. Thus, the Boltish Crater in Ukraine, 24 km in diameter and estimated to be 65.4 million years old, may be part of this same group of impacts.

However, scientists still do not have absolute proof that the Nadir Crater was formed by an asteroid. For this, it is necessary to analyze soil samples. A drilling request has been filed.

See also  The Governor announced! Swimming is banned in the Pacos today