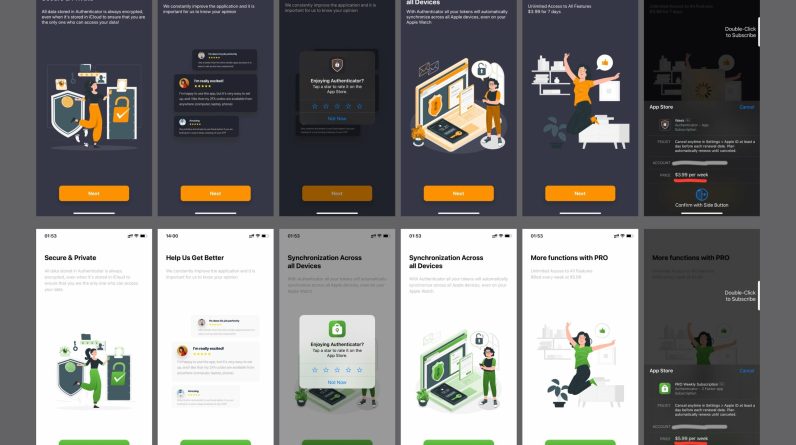 Apps that copy concepts and functions from other apps are nothing new. But, here, we are talking about apps that are exact duplicates.

It’s not just Android attacked by scams and other malicious applications. The app store is affected by a mechanism detailed by an independent developer on Twitter. In short: many applications are cloned and then they can trick users.

Attack of the Clones (on the App Store)

Technically, when developers submit their apps to the App Store, Apple can’t see where the trick is. These apps respect the App Store’s rules, at least on the face of it. However, these are clones, i.e. apps copied from other existing original apps. Everything is copied, the colors can be changed, but the interfaces you can see in the example below are very similar. It’s Kevin Archer, an independent iOS developer, who has shed light on this fraudulent practice. He already linked it back in February, but things still haven’t changed.

They copied our entire app @AuthWidget. It’s actually a copy-paste, pretending to have the same features we do, but their app doesn’t support Apple Watch and Widget. Such a cheap imitation. pic.twitter.com/zsDt9FAJXr

Kevin Archer, who suffered from this problem in one of his applications, claims that the fraudulent app not only copied his application’s illustrations and text, but also left notes on the actual features of his application. Not added. So we end up with in-app purchases, unable to take advantage of the features offered. This is a scam not only for developers but also for users.

A persistent problem with the App Store

You can contact Apple to inform them and avoid cloned apps, although it will take time for the request to be processed. Sometimes it takes weeks to get a response.

The problem of fraudulent iOS apps is an old one. In 2012, Apple’s Bill Schiller was absolutely furious when a fake app shot to the top of the App Store rankings, according to documents shared in the lawsuit. Epic vs. Apple.

Last year, Apple was sued by developer Costa Eleftherio for this exact issue. Apple faces a similar case With the creators of PUBG Mobile. More recently, sports the word The App Store has become the latest victim of the problem. Wordl clones appeared on the ‘App Store’ as the game became popular.