Home Science Climate Change: Floods, Fires, Droughts… All the alerts are triggered around the world 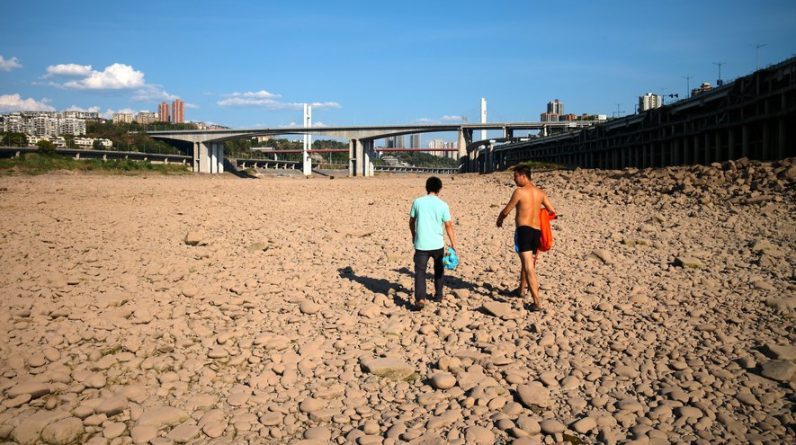 Over the past few days, extreme events have been taking place in Southern Europe and North Africa. Others are expected in the US and China by the end of the week.

Everywhere, from China to France or the United States to Algeria, climate change is manifesting itself this weekend in the form of major floods or historic droughts, devastating fires or floods.

This weekend, China issued its first national drought warning of the year, just as authorities mobilized teams of experts to protect crops from wildfires and extreme temperatures, as heat waves hit the Yangtze River basin.

The nationwide yellow alert came after regions from Sichuan in the southwest to Shanghai in the Yangtze River Delta experienced weeks of extreme heat, with government officials repeatedly blaming climate change. Forecasters estimate that the current heat wave will not begin to subside until August 26.

There are similar concerns in the American West, where a large area has also been hit hard by an unusual drought and was placed under an exceptional flood warning overnight from Friday into Saturday.

A “period of significant rainfall” could affect the states of Arizona (in the southeast) and New Mexico (in the southwest), with exceptional flooding, especially in fire-ravaged areas, the National Weather Service said.

On the fire front, the news turned slightly more positive this Saturday in Valencia province in Spain, although temperatures are feared to rise further. The progress of the massive Baijis disaster, which stretches over 135 kilometers (since last Monday, almost 20,000 hectares of vegetation has burned, 3,700 people have been evacuated or trapped), thus seemed to be contained. Val d’Epoque in the same area (9,300 devastated hectares) was hit by mid-week rains.

See also  A new study suggests that humans could survive if the magnetic field on Mars were right.

In neighboring Portugal, the Serra da Estrela fire has been brought under control, but even there, vigilance remains in order, although a new heat wave is expected this Saturday.

Also, after being brought under control for the first time last week, the fire started again on Monday due to strong winds. In the heart of a UNESCO-recognized park, the fire destroyed 25,000 hectares of this protected area.

Finally, this weekend is the final report on the spectacular and numerous forest fires that hit Algeria in the north on Wednesday and Thursday, during which firefighters intervened in 51 disasters (almost all now extinguished), according to the Algerian civil. Security.

Local media reported the 38th victim (a 72-year-old man in Guelma) on Saturday. The fire destroyed more than 10,000 hectares of El Calaf National Park. It is classified as a “biosphere reserve” by UNESCO, especially because of its unique ecosystem in the Mediterranean Sea.