Home World In Buenos Aires, the struggle against the cost of living continues 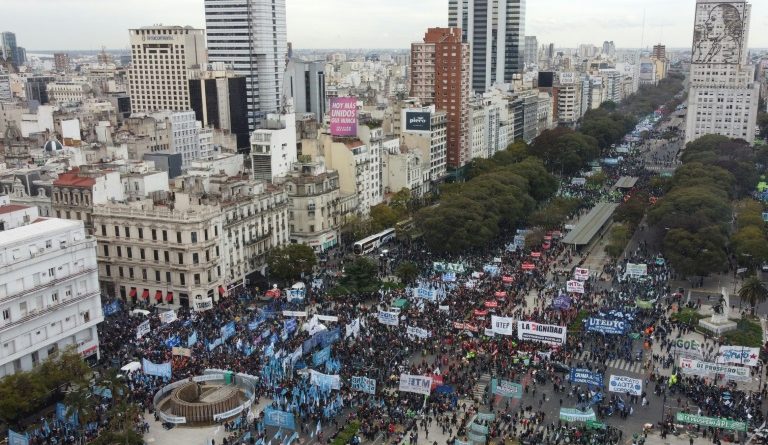 Several thousand people blocked the center of Buenos Aires on Wednesday, during demonstrations with unique messages against the cost of living, as the mobilization extended to sectors close to the government.

The largest demonstration, held on the outskirts of parliament, drew several thousand people at the invitation of unions, including the large CGT (General Confederation of Workers), traditional allies of the center-left Peronist government.

The march, according to organizers, was aimed at “defending the government and condemning those who take bread from the mouths of the workers,” specifically slamming “entrepreneurial speculators” accused of fueling Argentina’s inflation. (46.2% since January, 71% in one year).

He targeted the peso’s “financial speculation by those who expect big profits from devaluation” and “political speculation by (right-wing) opposition parties who want to bring the country to the brink of suffocation to ensure the success of the society.” In the 2023 general election, CGT leader Hector Dare said.

The massive presence of the CGT – particularly in some sectors that have participated in mobilizations against the IMF in recent months – is seen by observers as a signal of general fatigue facing the erosion of purchasing power in the camp. of the supporters of power.

“Inflation has reached intolerable levels, which will pulverize the purchasing power of all workers,” declared a press release from the CGT before the march, refraining from criticizing the government, but saying “the severity of the situation calls for urgent and profound solutions.

Three kilometers away, another demonstration in the Plaza de Mayo, in front of the president’s headquarters, brought together a few thousand people from far-left organizations, critics of the government and its agreement with the IMF on debt. The deal provides for increased budgetary discipline, moving towards balance in 2025 (versus a deficit of 3% of GDP in 2021).

Unions close to power “condemn inflation, but the government is complicit because it does nothing,” the head of the Left Front told AFP Juan Carlos Giordano.

These leftist organizations, with a strong ability to mobilize on the street but no real political weight, specifically demand a drastic increase in the minimum wage from 45,540 pesos (325 dollars at the official exchange rate) to 105,000 pesos (744 dollars). Bonus for the more vulnerable.