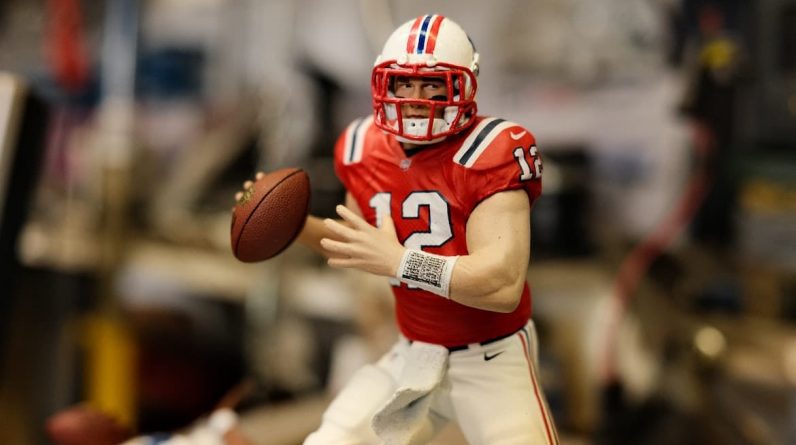 The quarterback (QB), is without a doubt, the most important position on the football field due to the many essential roles he plays. He is the player that touches the ball the most on offense and is most responsible for throwing forward passes for a touchdown.

A lot rests on the shoulders of the quarterback as the leader of the offense. No other player on the pitch can do more to win or lose than him. Every football team relies heavily on its quarterback’s ability to make timely plays.

There have been over 700 quarterbacks to debut and play at least one NFL game since the Super Bowl era. This begs the question: who are the greatest players to ever play the quarterback position?

Questions such as this are heavily debated among fans and football pundits. And with the enormous talents that have graced the league, it can be pretty difficult to squeeze out a top 10 list. However, one thing we can all agree on is that numbers don’t lie.

With that being said, we decided to rank the top 10 greatest quarterbacks of all time based on their stats, resumes, and impact on the game we all love. Check out who makes the cut:

Imagine being considered a top 10 quarterback of all time without a ring. That’s how good Dan Marino was.

The Miami Dolphins selected Marino as the 27th overall pick during the 1983 NFL Draft. He was named the NFL MVP and Offensive Player of the Year in 1984 after setting single-records for passing yards and passing touchdowns.

Marino is a three-time First-Team All-Pro, nine-time Pro Bowler, five-time passing yards leader, and three-time passing touchdowns leader. He finished his 17-year career with many single-season records to his belt, many of which have since been surpassed.

Get the latest NFL lines on the FanDuel Sportsbook app.

John Elway may be more of a suit and tie personality today, but he surely made his mark during his time as a starting quarterback for the Denver Broncos.

Elway had such muscular arms that made him a passing juggernaut and prolific rusher. The current Broncos president of football operations took the franchise to five Super Bowl appearances, winning two.

Most notably, he concluded his pro football career in style, winning the Super Bowl in his final season and receiving his only Super Bowl MVP award after the game. His last Super Bowl appearance also made him the first player to start in five games, a then-record which has since been surpassed by Tom Brady.

Elway was named league MVP in 1987 and is one of 13 quarterbacks to win at least one Super Bowl and one NFL MVP. He made the Pro Bowl nine times and led the league in passing yards in 1993. Elway was inducted into the Hall of Fame in 2004, six years after his retirement.

With his many accomplishments, you can hardly argue his spot as one of the greatest quarterbacks of all time.

Roger the Dodger spent his whole NFL career with the Dallas Cowboys. He was one of the most popular NFL figures in the 70s, and led the Cowboys to five Super Bowl appearances in just ten years, two of which ended in triumph.

Staubach was named the Super Bowl MVP in 1971 and earned 6-Pro Bowl selections. He led the league in passer ratings four times and received the NFL Man of the Year award in 1978.

Staubach also earned the nickname, “Captain America,” as a starting quarterback for the Dallas Cowboys. He was awarded the Presidential Medal of Freedom by President Donald Trump in 2018.

Drew Brees spent his first five years in San Diego and enjoyed moderate success. He signed with the New Orleans Saints in 2006 and the rest, they say, is history.

Brees led the Saints to their first, and as of this writing, only Super Bowl championship in 2009. His stellar performance against the Indiana Colts earned him the Super Bowl MVP award.

Brees holds the record for most consecutive games with a touchdown pass and is second on the all-time list for most completion percentage, touchdown passes, passing yards, pass completions, and pass attempts. He was awarded the NFL Offensive Player of the Year in 2008 and 2011.

The Saints GOAT quarterback was named an All-Pro five times, including one First-Team selection, and made the Pro Bowl 13 times. He led the league in passing yards seven times, a record that still stands to this day.

Brees hung his boots in 2020, but his contributions to the Saints franchise will forever remain in the hearts of NOLA fans.

Aaron Rodgers entered the league in 2005 as a backup quarterback to Brett Fevre (one name that barely missed out on our top 10 ranking). The Packers handed quarterback responsibilities to Rodgers after Favre’s initial retirement in 2008.

This move would prove fruitful two years later as Rodgers led the Packers to their first Super Bowl title since 1996. Rodgers registered 24/39 completed passes for 304 yards and three touchdowns, enough to win him the Super Bowl MVP.

Although he has had disappointing playoff moments, ever since his regular season numbers puts him on a different pedestal above his contemporaries. Rodgers is a 4× NFL MVP, winning the award back-to-back in 2020 and 2021, 4× First-Team All-Pro, and 10× Pro Bowler. He has also led the league in passer ratings four times and passing touchdowns twice.

The Green Bay superstar holds several NFL records, including the most consecutive passes without an interception (402) and the best career touchdown to interception ratio (4.83).

Otto Graham is another name you’re probably not too familiar with. His glory days as a superstar quarterback spanned ten years, but they were years of unmatched dominance. There was no other quarterback who could throw a pass like him in the pre-Super Bowl era. None!

He led the Browns to league championship games throughout his entire playing career. Graham was the key man during the franchise’s championship run, leading them to three NFL championships.

Automatic Otto was named league MVP in 1951, 1953, and 1955. He also made the Pro Bowl five times and First-Team All-Pro four times. Graham held the record for highest career passer rating by a quarterback (86) until Joe Montana hung his jersey in 1994.

His career-winning percentage sits at 0.81, the highest for a starting quarterback in NFL history. Graham rushed 44 touchdown passes in his nine-year career, and led the league in this stat category in 1952.

His Hall of Fame induction in 1965 capped off an already legendary NFL career. He definitely deserves a spot in the top five. RIP Otto!

The average modern-day football fan may not know how iconic Johnny Unitas was during his playing days. But one thing that’s hard to deny is how much of an influence he still is to this day.

Unitas spent most of his professional career with the Baltimore Colts and won the NFL championship three times during the pre-merger era, and a Super Bowl title. He was named the league’s Most Valuable Player in 1959, 1964, and 1967. Unitas was the NFL Man of the Year in 1970.

The legendary quarterback spent 18 seasons in the league. During this stint, he made the All-Pros eight times (including five First-Team selections) and Pro Bowl 10 times. He led the league in passer ratings twice and topped the passing yards chart four times.

Unitas was also the king of pass touchdowns from 1957 to 1960. He held the record for most consecutive games with at least one touchdown pass (47) for 52 years.

Johnny U was inducted into the Hall of Fame in 1979, six years after retiring from professional football. RIP Johnny!

Peyton Manning is arguably the greatest first overall draft pick to grace the NFL. The Sheriff holds so many NFL records, such as most league MVPs (5), seasons with at least 4000 yards passing (14), and First-Team All-Pro selections (7). Manning is the player with the most single-season passing yards (5,477), and single-season passing touchdowns (55). He is also the only quarterback with at least six touchdown passes in three league games, and one of eight quarterbacks to register seven touchdown passes in a single game (a league record).

Manning won his first Super Bowl as a starting quarterback for the Indianapolis Colts and was named Super Bowl MVP that same season. This was the Colts’ first championship since relocating to Indianapolis and the franchise’s first title in over 30 years.

He signed with the Denver Broncos after 14 seasons with the Colts. In 2016, Manning won his second Super Bowl with the Broncos in what would be his final game as a professional footballer. This made him the first starting quarterback to lift the Lombardi trophy with more than one franchise.

Joe Montana takes the 2nd spot on our list, which is crazy to think about considering his career achievements. Montana was widely regarded as the greatest QB during his playing days and was instrumental to the 49er’s success during the 80s.

He is a four-time Super Bowl champion and became the first ever player to win three Super Bowl MVPs. Joe Cool holds the record for most passes without an interception; a ridiculous 122 passes in four games. No other player has a higher passer rating in the Super Bowl than Montana’s 127.8.

Montana spent his final two seasons with the Kansas City Chiefs before retiring in 1994. He was inducted into the Hall of Fame six years later.

22 years ago, no one would have thought that Tom Brady would make this list. Brady had to wait until the 6th round to hear his name during the 2000 NFL Draft. He was drafted 199th overall by the New England Patriots in what might go down as the biggest draft steal in NFL history.

Brady went from underrated to undeniable. In his first 20 years with the Patriots, Brady led the franchise to 17 division titles, nine Super Bowl appearances, and six championships.

After a successful stint in Greater Boston, Brady moved to Florida to sign with the Tampa Bay Buccaneers. He led the franchise to their second-ever Super Bowl championship in his first season, defeating a Kansas City Chiefs team who had the best regular season record.

About to enter his 23rd season as a professional football player, Brady has won it all and seems hungry for more. He is a 5× Super Bowl MVP, 3× league MVP, 15× Pro Bowler, and has earned five All-Pro selections.

He also tied for the longest touchdown pass when he threw 99 yards to Wes Welker during a regular season game against the Miami Dolphins. Only 12 other players have achieved this feat.

If there were ever any doubts in your mind that Tom Brady is the GOAT quarterback, these achievements should erase them.

There are a couple of phenomenal quarterbacks missing on our list, and you could argue that some of these names belong in the top 10. So, we decided to acknowledge these players for their contributions.