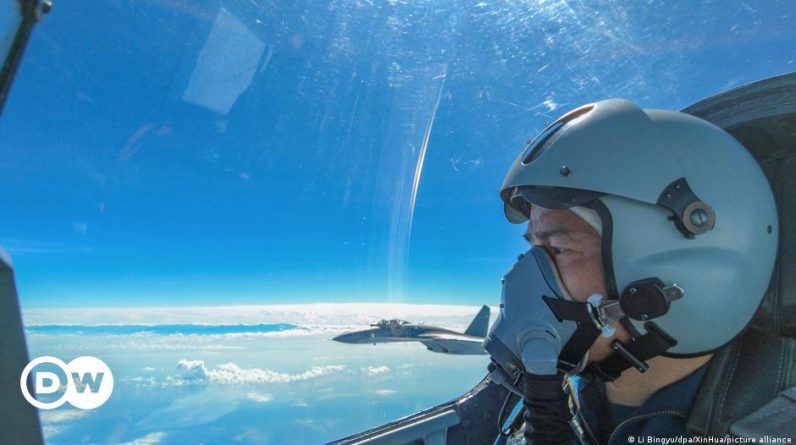 China’s military maneuvers around Taiwan raise concerns about the potential for conflict in this important region for global trade.

Chinese tactics include anti-submarine drills aimed at US support for Taiwan in the event of a possible Chinese invasion.

A warning to troublemakers

According to Chinese state television CCTV, the ballistic missiles flew over Taiwan, the first time. The Chinese military has also deployed fighter jets, warships and drones.

China describes US House Speaker Nancy Pelosi’s visit to Taiwan last week (August 2-3, 2022) as a “major provocation”. A spokesperson for the Chinese Foreign Ministry said at a press conference on Monday (08.08.2022) that Beijing backed its move.

“China’s position is fair, just and reasonable. The measures we take are firm, strong and appropriate. This is a warning to spoilers and a lesson to independence supporters. Taiwan,” Wang Wenbin insisted before adding that his country was inviting “The US should examine its conscience, correct its mistake as soon as possible and stop playing the Taiwan card to hinder China’s development”.

According to Japan, some Chinese missiles have landed in Japanese waters

China considers the island of Taiwan, with a population of about 23 million, a breakaway province, while Taiwanese authorities demand an independent existence.

Russia’s aggression in Ukraine has reignited fears that China will take action against Taiwan.

The Taiwanese were worried

In Taipei, residents are as confused and reactive as these passers-by: “I think Nancy Pelosi’s visit is a kind of political event, because she will soon retire as Speaker of the House. Accidentally sparked a conflict, which is not good for Taiwan.”

says another “There are pros and cons to visiting Pelosi”. According to him, “The negative side of this is that it’s more complicated to export goods to China now, and the positive side is that we’re getting more recognition from the rest of the world.”

For its part, Taiwan has condemned the continued Chinese military maneuvers. Taiwan’s armed forces announced Monday that they will hold live-fire military exercises this week to simulate the island’s defense against a Chinese invasion.

See also  Biden confirms US withdrawal from Afghanistan before August 31

But the army has said that these exercises are pre-planned and therefore not in response to the Chinese exercises.