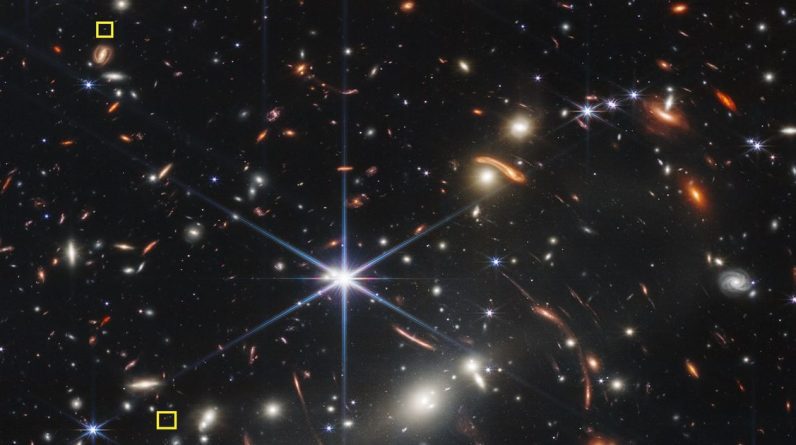 Scientists around the world have analyzed the first data collected by the James Webb Space Telescope released on July 12. A Geneva team has shown that the oldest galaxies are more evolved than models predicted. And it’s a surprise!

Scientists from the Geneva Observatory have analyzed a hundred ancient galaxies seen in images taken by the James Webb Space Telescope (JWST). Galaxies are very close to the time of the Big Bang 13.8 billion years ago…

Seen between 600 and 700 million years after the Big Bang – outlined in yellow in the image above the article. Their study was published earlier on the arXiv websiteTo make it available to the scientific community.

“The first surprise was the spectacular oxygen signature in JWST’s first observations,” notes the study’s first author, Daniel Scherer of the Geneva Observatory, enthusiastically. “The data show that these distant galaxies are already much more evolved than predicted by computer-generated astrophysical models,” he told RTSinfo by phone.

Scientists are delighted with this unexpected discovery. Unheard of – the spectra of distant galaxies like Hubble have never been able to measure – thanks to hugely powerful spectroscopy instruments, including the NIRSpec instrument aboard JWST. (reading box). It measures Spectral shift Targeted material: The obtained spectrum provides information about the age and chemical composition of the galaxies.

>> Emission spectrum taken by NIRSpec of a galaxy located 13.1 billion years ago:

The first spectroscopy of the composition of a distant galaxy provided by the NIRSpec instrument on the James Webb Space Telescope. [NIRSpec Emission Spectrum/JWST – NASA, ESA, CSA, STScI]

>> The same spectrum was used in a more scientific version, published study:

The most common chemical elements in the universe – light and simple – are hydrogen and helium: “When these gases merge into stars, they produce more complex elements – and heavier ones like carbon, nitrogen, oxygen or neon,” explains Professor Scherer.

Scientists did not expect these elements until about 600 million years after the Big Bang: “In a galaxy that has not evolved much, there are no more generations of stars … And these are the largest. Heavy chemical elements. They expel them: for example, the oxygen produced goes to the next generation of stars. “.

“At this very remote time, the chemical composition has never been measured!”, underlines the astrophysicist. “Furthermore, the abundance of oxygen – ten times less than in the Sun – shows that matter has been recycled very quickly. These galaxies form very quickly and give life to many stars. Stars with very short lifetimes: this is how they produce oxygen”.

An evolution to clarify

Scientists will continue to work to understand how the chemical composition of these distant galaxies develops and at what speed different heavy chemical elements appear.

“Heavy elements are a sign of being produced by stars. When we see carbon, nitrogen, oxygen, etc., we know there has been massive stellar activity. A low-mass star like our Sun lives for nine billion years: it evolves slowly. So it has little to do with the chemical composition of its galaxy. has an effect”, and notes Daniel Scherer.

“It’s the short-lived stars that produce the oxygen. And it takes a lot to start a new cycle of star formation.”