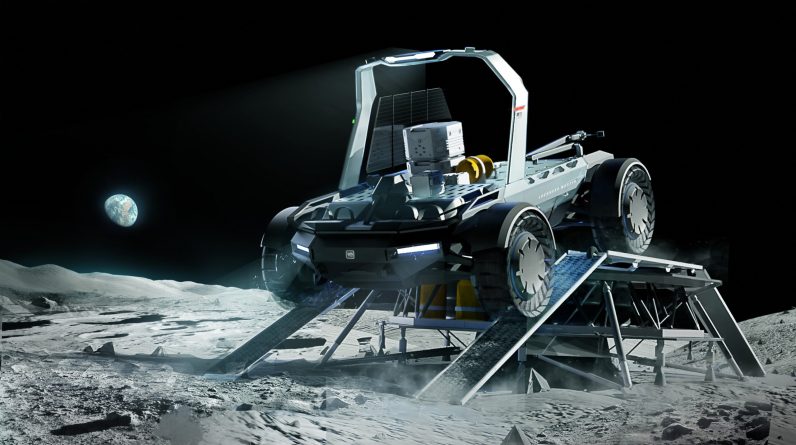 GM, maker of the Hummer EV and defense and security company Lockheed Martin, presented their Lunar Mobility Vehicle, which NASA hopes will be selected for future manned lunar missions. A rover based on the Hummer EV.

In a few years, NASA’s Artemis mission It plans to return four astronauts to the moon by 2027. To do this, the US space agency needs a new rover, the popular vehicle that allows astronauts to go to the moon. So it launched a call for proposals and the pair formed between US manufacturer GM (to whom we owe the Hummer EV) and US defense giant Lockheed Martin (to whom we owe the F35) revealed some details of their proposal.

A common ground with the Hummer EV

The rover from the two American companies will naturally rest on a well-known technology baseThis is the popular 100% electric Hummer EV. It has very unusual crossing capabilities (as well as a particularly practical crab mode) and uses only electrical energy. GM announces A statement The work that led to the design of the Hummer EV will be resumed for this rover, especially with features like performance, chassis, battery and autonomous driving!

In fact, despite the amazing consumption of the Hummer EV (in some cases it pollutes more than an electric car), it is a very attractive technological showcase. We also wonder if it has any real use on earth. So engineers took its platform and modified it through a simulator to succeed in placing its wheels on the lunar surface rather than flying them into space.

Batteries must be strong

On the battery side, if this Rover is selected, it will carry the GM Ultium electric platform currently only integrated into the Hummer EV. As a reminder, it has an energy efficiency of 50 to 200 kWh in 2020, very high efficiency and very fast charging technology through its 800 volt configuration. However, they must be protected from bad weather, especially on the moon where the temperature varies between day and night by 260 degrees Celsius! If they are not solid batteries, they must be resistant!

Autonomous driving in the project

Also very important is the autonomous driving area, which is in the hands of GM’s Cruise division. It will be much harder than Earth, as engineers can’t try it for thousands of kilometers under real conditions. Not taking into account that the surface of the moon is much less smooth than a paved road. The rover will allow two astronauts to explore the moon.

In a recent media interview Automotive NewsBrent Diep, GM’s program manager, said the old 1971 rover — developed at the time by GM and Boeing — was taken as a base as it successfully completed its mission. The new rover should be usable on the lunar surface for 10 years. In the case of autonomous driving, the man recalled that the absence of a road would make the task easier, but more complicated would be to recreate the surface of the moon on a virtual map.

GM and Lockheed Martin are certainly not alone in this call for projects. Another example is car manufacturer Nissan, which entered into partnership with American company Sierra Space. So we have to wait for NASA’s selection.

As part of the Artemis mission, NASA unveiled the electric car responsible for transporting astronauts to the launch pad on the way to the Moon, which …
Read more