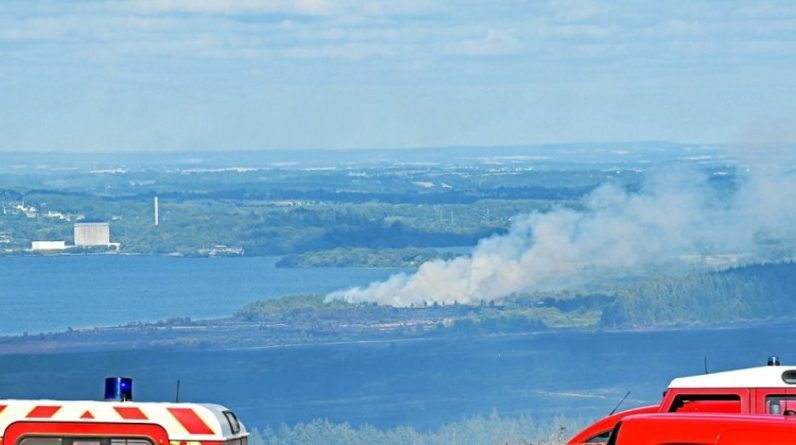 After a A brief silence, 150 firefighters and 40 fire engines were mobilized again this Friday evening to try to contain the renewed fire in the Arrée mountains. A fire protection command post has been reactivated near the Mont Saint-Michel de Prosparts church and relief is being organized. At a height of 381 m, the firemen can observe the various hearths around this viewpoint, in this air smelling of smoke.

The most important is situated near Lake Brenilis, at the level of the swamp. In this humid environment, highly flammable and difficult to access, because of the wind, the fire continued to smolder before taking off again. On the Saint-Rivol side, three fire exits are also found at the Guerjean level. Two others between Gros Melar (Cammana) and the RD11, and another on the edge of the RD785. It is a dozen in total, of which six are important.

“By noon, there were hot spots everywhere, especially on the right rear of the fire. There is smoke behind Brenilis Power Station. The start of the fire is important,” underline the emergency services placed under the charge of Lieutenant-Colonel Gilles Paulic.

Given the rekindling of the fire at the edge of the lake and the wind’s path, one question haunts viewers: Is the Brenilis nuclear power plant in danger? “In the short term, no. But, for now, she’s on track. We hope to see the intervention of air resources,” answered Lt. Col. Gilles Paulik earlier in the evening.

In a press release sent out in the afternoon, the Western Anti-Nuclear Consortium expressed concern about these fires near Brenilis: “If the fuel (fission material) was removed shortly after the plant closed in 1985, there is still a lot of radioactive material” . Officials of the plant could not be reached this Friday evening. As of 2018, the file for the complete decommissioning of the Brenilis site is in the hands of the Nuclear Safety Authority (ASN). “We hope to be able to start work in 2023,” director Jean Cuccinello told us in March 2021.

EDF is preparing for these major tasks, which are planned over a 17-year period. An example: remote control robots are used to remove a horizontal ship. The elements will then be placed in waste packages, which will go to the Andra storage center (National Agency for Radioactive Waste), Soulaines-Dhuys (Aube)”, EDF told us during this exclusive site visit, where it will be for more than a year. .

In the afternoon, a call was made to dispatch a dash water bomber. It was scheduled to depart at around 8:15 pm on Friday and field reinforcements from neighboring sectors were planned for the night. “As part of the containment of the fire on Wednesday July 21, the presence of firefighters still on site allows immediate intervention on the various outbreaks identified,” the province notes. Six groups are spread over the forest fire.

Our file on the fire in the Arrée mountains

Fires were suspected in Huelcote at Cote-Mogun, on the edge of the Lorient-Roscoff axis, where a large emergency system was deployed just after 5pm. There was no smoke at the scene, but a dozen emergency vehicles, including large-capacity tankers. More than two dozen men from several rescue centers remained there until 7:10 p.m. until the device was lifted.

For Lt.-Col., the fire in the Are Mountains should last “at least another week.” As for road transport, Finisterre’s principal asks to avoid the sector of Brasparts and Brenilis. Several roads are closed, including the RD785 from Roc’h Tredudon to Brasparts and the RD11 from the RD764 junction.

See also  "Another Eden: Cat That Travelt Time", the final episode of the game content Apocalypse "Sword Poetry and the Missing Wings", which was first serialized in the international edition of "Another Eden:"! Apple News Network Apple Daily