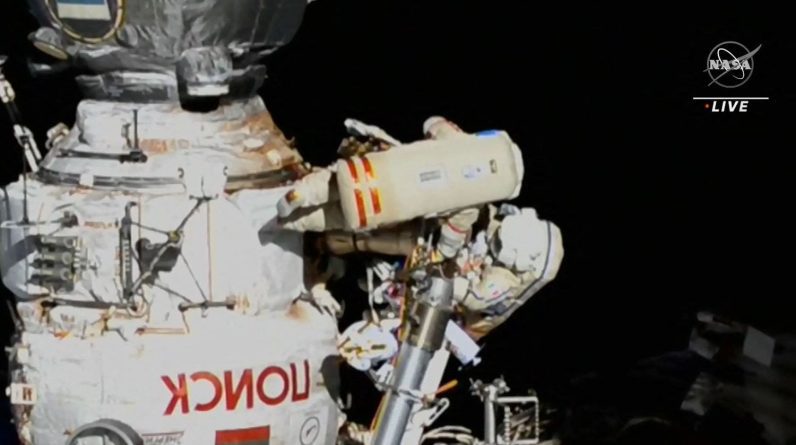 This will be the second stay in space for the 45-year-old Italian engineer and fighter pilot, who left for the ISS on April 27.

One small step for her, one giant leap for Europe. Samantha Cristoforetti of Italy performed the first spacewalk by a European astronaut from the International Space Station (ISS) on Thursday, July 22, in images released by NASA. The European Space Agency (ESA) astronaut’s spacewalk, carried out at an altitude of 400 km, lasted six and a half hours in the company of Russian cosmonaut Oleg Artemiev.

They were in charge of several repairs, notably the Russian science module Nauka and the new robot arm ERA (European Robotic Arm). Launched into orbit in July 2021 after several delays, the ERA robotic arm was installed on the ISS a few months ago. At 11 meters long, it can perform maintenance tasks and operate from inside or outside the station, and even from the ESA station on the ground.

It will be Samantha Cristoforetti, a 45-year-old engineer and fighter pilot, who left for the ISS on April 27, making it her second time in space. She holds the record for the longest stay in space by a woman in a single mission, having spent 199 days in orbit in 2014 and 2015. This time he will take command of the station there, a first for a European astronaut.

Essays on the same topic

On the same topic

As seen from Europe

Franceinfo selects daily content from the European public audiovisual media that are members of Eurovision. These contents are published in English or French.