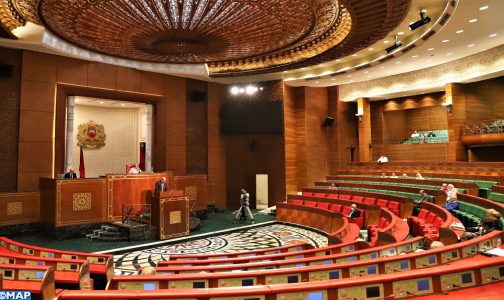 In its recommendations included in its final report presented on Monday during a debate session at the Councilors, the task force stressed the need to set up a legislative and regulatory framework to govern the administrative structure, storage conditions, financial resources and other activities. It is necessary to establish an integrated system to manage and protect strategic stocks of basic products.

In terms of storage, the report recommends an effective control system regarding food stock distribution and its management methods, as well as adopting an early and early warning mechanism against risks that threaten industrial chains and supply.

Speaking at the event, El Mehdi Atmoun, Chairman of the Thematic Committee on Food Security in the House of Councillors, confirmed that the report was the result of three months of continuous work with all national and international actors.

As a result of the series of listening sessions and several field visits organized with the concerned departments and agencies, he continued, to get a closer look at the real situation of the National Security Organisation. Italy to exchange best practices in the field.

The task force promoted the preservation of national achievements in terms of development, particularly the major programs and projects initiated by the Kingdom after independence, and called for the creation of an independent national agency for food security and sovereignty. To coordinate national strategies in this sector, monitor and anticipate any crises that threaten food systems and identify and propose intervention methods.

He emphasized the need to strengthen financial and financial support mechanisms to strengthen self-entrepreneurship and contribute to the creation of a new generation of middle class in the rural world.

The report considers it necessary to speed up the implementation of the Unified Social Register (RSU) in order to facilitate the process of reforming the compensation system. Compensation fund.

The document calls for the creation of quality labels for food products, covering origin, designation and carbon footprint, and the continued development of marketing channels for local agricultural products.

With regard to food safety, the task force called for strict and transparent control system for strategic wheat stocks, while recommending the creation of an effective control system for points of sale and restaurants. Rational use of antibiotics in veterinary medicine. The above task force has developed a dashboard covering all national indicators related to food security, which has made it possible to provide insightful analysis of all indicators, particularly food availability, nutritional quality and equity of distribution. , and to create a prospective mechanism of the food security situation in the coming years and the basic requirements that must be met for the emergence of a sustainable national food sovereignty, Mr. Admoun explained in his speech.

The committee recommends the creation of a technical mechanism to monitor the implementation of the report’s recommendations, under the supervision of the Speaker of the House of Councilors, he said. The mechanism will include representatives of the Federation, relevant government departments and relevant public and private organizations and a panel of experts and researchers, with the possibility of consultative cooperation with relevant United Nations agencies, he continued.