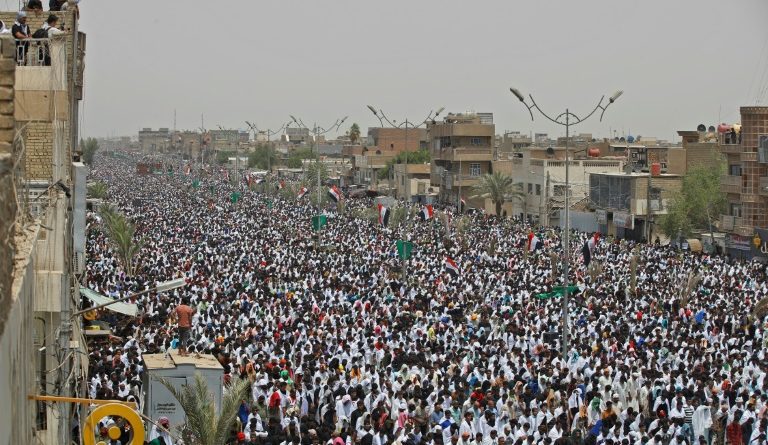 Shiite leader Moqtada Sadr rallied hundreds of thousands of Iraqis in Baghdad on Friday for a joint prayer, a gesture intended to pressure his opponents to speed up the formation of a government without himself participating.

After the October 2021 legislative elections, 42 million Iraqis, exhausted by a major economic and social crisis, are still waiting to know who will be their next prime minister.

Majority Shiite parties have failed to provide a new head of government for the oil-producing nation. And the crisis deepened on June 12 with the resignation of 73 members of parliament from Moqtada Sadr’s current.

Moqtada Sadr, with his title of “Sayed,” has played a significant role in the Iraqi political landscape since the fall of dictator Saddam Hussein, who was overthrown by the US-led coalition in 2003 and executed in 2006.

Friday’s great congregational prayer in Baghdad, which he called for, sounded in full, as if he could easily gather hundreds of thousands of believers even above 40°.

Absent from the rally in the Sadr City district, Moqdada Sadr called on a relative, Sheikh Mahmoud al-Jayachi, to deliver a Friday prayer sermon in the form of an apostrophe to his opponents in the coordination framework.

This is because Moqdada Sadr has now left the task of forming a government to a coalition of some Shiite parties close to Iran. Joining meetings, the caciques still could not agree on the structure of integration.

“We are at a difficult crossroads in forming a government, and we have been handed over to a people who do not believe,” Sheikh al-Jayachi told worshipers gathered on al-Ballah Avenue, in this sermon written by Moqtada Sadr.

Some “we’ve already seen in training aren’t up to it”, he said.

As a warning to his enemies, the Shiite leader attacked Hachh al-Saabi, a former paramilitary force now integrated into regular forces that many Iraqis accuse and abuse of being Iran’s fake nose at home.

“It needs to be reformed and unruly elements removed,” he said, scratching out “foreign interference”, though not pointing fingers at a particular country.

Sheikh Mahmoud al-Jayachi called for “Hashta to be kicked out of politics and business” because the powerful coalition has a political showcase and representatives in parliament in the coalition structure, and some of its leaders have been accused of fraud.

“Yes! Yes to reforms! Yes! Yes to the reformer!”, chanted the faithful about Moqtada Sadr.

The Sadr City district in Baghdad was christened with the surname of Moqdada’s father, Mohammad Sadr, who was assassinated by Saddam Hussein in 1999. And this prayer was arranged in honor of Sadr’s father.

Sajjad, a 28-year-old daily laborer and resident of the neighborhood, says he is there “out of love” for Moqtada Sadr. “We want to prove to the world that he has a foundation and people who obey him,” he said, sitting on his mat.