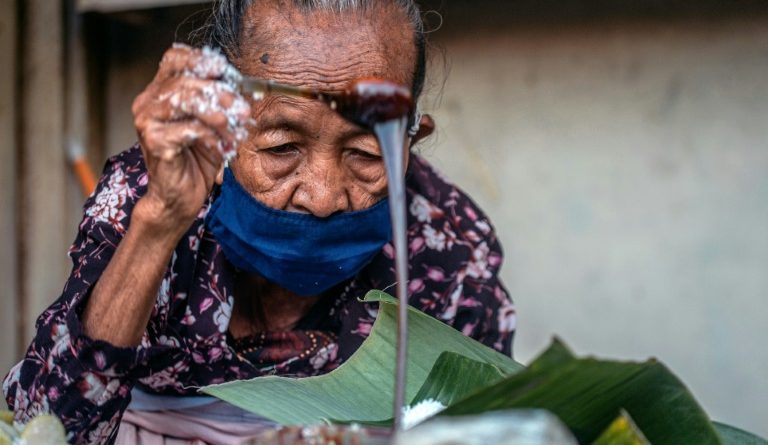 Before dawn in the Indonesian city of Yogyakarta, famous for its street food, a line of half-asleep customers waits for the local star.

At exactly 5 o’clock, a decrepit old lady dressed in sarong appears on the back of a black motorbike.

She descends slowly, clutching her basket of treats she has sold for more than half a century.

At 76, Mbah Satinem has long been a food secret known only to residents of Indonesia’s cultural capital, but he rose to stardom after appearing in the 2019 Netflix series “Street Food: Asia.”

Every day, she opens her stall before dawn and bends over a table to prepare and sell traditional sweets called ‘jajan bazaar’.

She puts several sweets on a banana leaf, including “lupis” made of sticky rice.

“I’ve been selling Lupis for a long time and nothing has changed,” he says from the stand he’s occupied since 1963.

“Luis and I are made for each other,” she laughs.

She cuts the cake with a nylon string, gently places it on a banana leaf, pours thick liquid palm sugar over it, sprinkles coconut flakes, and attracts a crowd for breakfast.

The recipe was a secret passed down by his mother. And cooking over wood fire gives this treat a smoky flavor.

“I used to help my mother make these treats. When she saw that I prepared them better than her, she asked if I wanted to sell them. I said yes.”

“She asked me again if I wouldn’t be afraid to do it, but I said no. So she wanted me to cook these treats.

Mbah Satinem’s stand is now surrounded by dozens of customers who notice, admire, and capture his gestures on their phones.

“His taste of Lupis remains the same,” said Budi, 49, who lives in the city.

“The flavor and thick consistency of Lupis, with the thick brown sauce, is delicious. »

to 9:00 a.m. Her desserts, which sell for 10,000 rupees (66 euro cents) each, are so popular that she has to hand out numbers to customers who are fighting and waiting for her cakes.

Customers from all over the island of Java, where Yogyakarta is located, had to wait for over an hour to satisfy their sweet tooth.

Rama Luhur, who hails from Jakarta, the capital of Indonesia, waited nearly two hours to taste the famous lupis after long salivations in front of the Netflix series.

“It’s worth it. You can see Jajan Basar everywhere, but I appreciate his hard work,” the 39-year-old Indonesian told AFP.

Mbah Satinem’s efforts stop only during the fasting month of Ramadan. The next day, she gets up in the middle of the night to cook.

Due to age, the old lady’s stand has become a family business.

Her husband takes care of the sticky rice, her son manages the wood fire, her daughter takes her to her stand and helps her during the four hours she works.

When asked why he hasn’t abandoned his stance, which is usually held by youngsters, the street food legend replied with a simple laugh.

“She loves it, she loves doing these parties.” “She Can’t Be Idle”