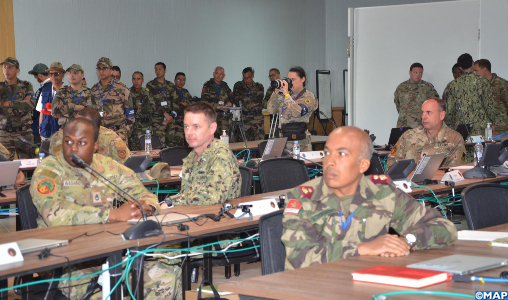 Agadir – Several journalists representing the national and foreign media visited the International Operational Center for the Training of “African Lion 2022” in Agadir on Wednesday, the 18th edition of which is being held in honor of His Majesty the King, the Supreme Leader and his High Command. Chief of Staff of the Royal Armed Forces (FAR).

On this occasion, Lieutenant Colonel of the FAR, Zouhair El Hmdani, celebrated his 18th candlelight “African Lion 2022” this year, recording significant progress over time and incorporating the necessary innovations. Especially the objectives expected in terms of joint exercises.

He explained in a statement to the press that the Functional Center in Agadir is responsible for the coordination and coordination between the various components capable of successfully carrying out the tasks of the “African Lion 2022” exercise and for the planning and conduct of joint activities.

For his part, Colonel McKinley of the U.S. Army stressed that the “African Lion 2022” exercise aims to strengthen joint technical and military action between the FAR and the participating countries.

This annual meeting aims to promote the exchange of military expertise between the US Army and the FAR.

Launched last Monday at the Southern Region General Personnel Level in Agadir, “African Lion 2022” is a joint exercise organized annually by the FAR and US Armed Forces.

This year’s edition (June 20 to 30, 2022) features the participation of 10 African and international countries, including Morocco and the United States, as well as twenty military observers from allied nations’ Agadir, Benguirre, Kenitra, Mahbaz, Toronto and Tandon.