Home World The role of the Al-Quds Committee, headed by the King, and its support for the Holy City and Maktisis were highlighted in Jordan (Final Information). 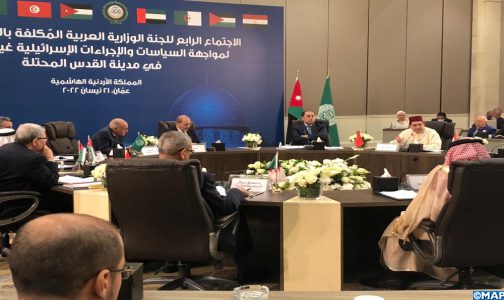 Amman – The role of the Al-Quds Committee, led by His Excellency King Mohammed VI, through the Bait Mal al-Quds Acharif Agency in supporting the work of the Holy City and Magdissis and the Arab and Islamic Institutions, has been praised by the Arab world. The Cabinet of Ministers for International Action to Counter Israeli Policies and Operations in Occupied Al Qaeda convened an emergency meeting in Amman, Jordan on Thursday.

The final report of the meeting, which was attended by Moroccan Foreign Minister, African Cooperation and Moroccan Representatives Abroad, noted the plight of the Palestinian people and their organizations in al-Quds and its defense. Shrines, in this case Al Aqsa Mosque, was presented as the right of Palestinians to enjoy their independence and within 1967 established an independent Palestinian state with al-Quds-East as its capital. The basis of the two states is compliance with international resolutions, the Arab Peace Initiative and the adopted notes.

The report called on Israel to end its aggression and occupation of all occupied Palestinian territories, to lift the blockade imposed on Gaza, and to end all measures that undermine security and peace and endanger the two-state solution. And opportunities for a just and comprehensive peace, which is an Arab strategic choice and a regional and international need.

It warned of the consequences of the continuing lack of political opportunities and economic tensions on the Palestinian people and the Palestinian National Authority, while calling for the resumption of serious and effective negotiations capable of restoring and maintaining peace, intensifying regional and international efforts, and restoring confidence. A just and comprehensive peace can only be achieved by putting an end to the conflict through peace processes and a consensus solution.

The report stated that it would reject all illegal Israeli practices aimed at altering the legal and historical status of the Holy Al-Aqsa Mosque and any attempt to impose its temporary and spatial secession. And the responsibility of Israel as an occupying power.

The participants in the meeting called on Israel to respect the historical and legal status of al-Haram al-Qudsi Acharif (Temple Mount) and to return to its pre-2000 status, guaranteeing the honor of al-Aqsa Mosque. , An area of ​​144 tribes dedicated to Muslims, is organized by the Department of Islamic Waqfs under the Ministry of Wakfs of Jordan for the Visit of Non-Muslims and places Muslim Saints as a jurisdiction with exclusive jurisdiction. To manage all al-Haram affairs and regulate access to them.

Recent developments in the Palestinian scene, ways to mitigate the current escalation in the courtyards of al-Quds and the blessed Al-Aqsa Mosque, as well as the consequences and conflicts between the two Palestinian parties and Israel were discussed at the meeting. From these developments.

Discussions also focused on ways to put an end to all practices aimed at the Arab-Islamic and Christian identity of the city of al-Quds.

The group includes the Kingdom of Morocco, Saudi Arabia, the Kingdom of Jordan, Palestine, Qatar, Egypt and Tunisia, as well as Algeria, the chair of the Arab Summit. The meeting is being attended by the Secretary-General of the United Arab Emirates and the League of Arab States, as an Arab State Member of the Security Council.

This meeting is the fourth meeting of the committee set up by the cabinet of the Arab League last year, and its last meeting was held in Cairo last September as part of the work of the 157th Ordinary Session of the Council of League of Arab Arabs. At the ministerial level.