Home World South Africa: Calls for sunshine and prayer after the tragic floods 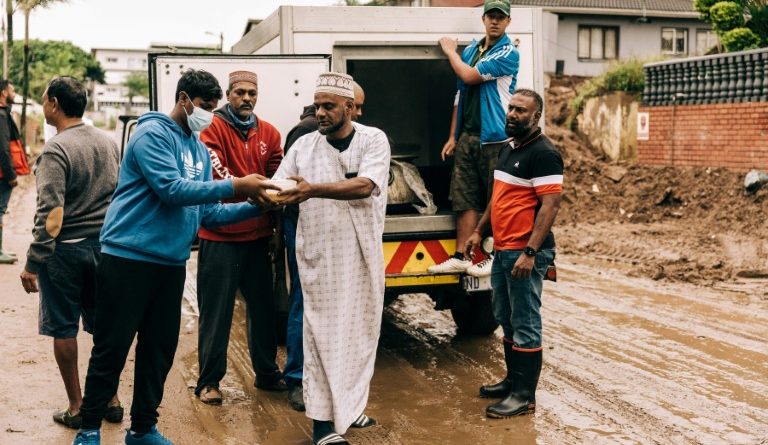 South Africa: Calls for sunshine and prayer after the tragic floods

Sunday’s almost rainless skies seemed to finally rest for South Africa, with its east coast flooding killing 400 and leaving tens of thousands homeless, with calls for prayers for Easter continuing to mount.

Most of the victims have been registered in the Durban region, where the port city of KwaZulu-Natal (KZN) has opened in the Indian Ocean, where it has been raining heavily for a week, causing floods and dangerous landslides.

It was raining in some places in the morning but nothing compared to the last few days. “The risk of flooding in KwaZulu-Natal is low today,” Pusletso Mofokeng, forecaster of the National Weather Service, told AFP. “The rain will completely disappear by Wednesday and next weekend.”

In recent days, ministers, traditional leaders, Zulu King Mizulu Zulu and President Cyril Ramaphosa have been on the field to assess the extent of the damage and support those in mourning.

Families are devastated, losing many members in a matter of seconds. Babies and children are dead, submerged or buried in the mud. People are still missing.

“We extend our deepest condolences to the families who lost loved ones. May the Almighty God wipe away your tears, ”said Hendrita Bogopane-Zulu, Deputy Minister of Social Affairs who visited the scene.

Calls for prayer increased many times during religious meetings this Easter Sunday.

Approximately 340 community service representatives have been appointed to provide psychological support in the affected areas.

Poor people in cities are severely affected by the weather. Houses made of corrugated iron sheets or simple wooden planks, often built on impenetrable and flood prone land, did not last long in the flood.

Water and electricity have been cut off in some parts of the province since Monday. Frustrated residents could be seen carrying buckets of water in carts on the side of the road. The food was missing and rotten.

Donations are collected across the country, especially at fire stations. Pasta, preserves, covers. An emergency government aid of 63 million euros (one billion rand) has been announced.

Roads and bridges intersect for slow relief. Rescue operations are continuing, but a week after the disaster began, hopes of finding survivors are slim. The work of rescuers now mostly involves rescuing bodies.

Many hospitals that are heavily used for injuries are damaged and not fully operational.

Authorities expect hundreds of millions of euros in damage. The region had already suffered massive devastation in July during an unprecedented wave of riots and looting.

Every year, the hurricane season from November to April unleashes storms in South Africa. Countries like Madagascar or Mozambique are constantly hit by deadly storms. But South Africa is generally left out.