Home World South Africa: After the deadly floods, some clothes for everything 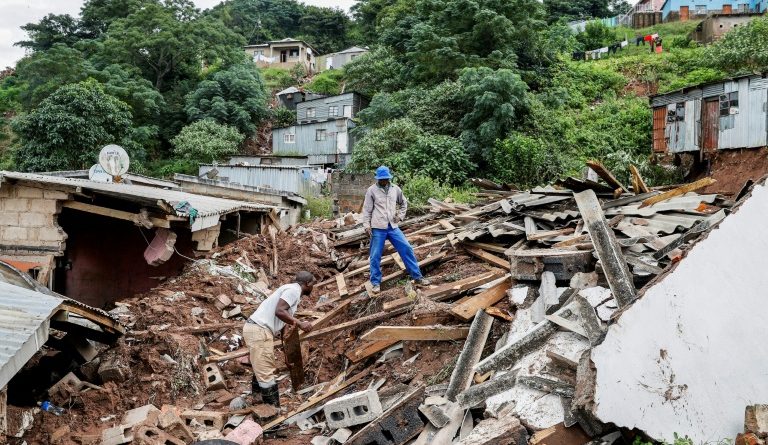 South Africa: After the deadly floods, some clothes for everything

“I have nothing left”: Cinetemba Duga stands in line with dozens of people, grabbing everything he can and a few clothes to recover from the devastating floods that ravaged the Durban region on the east coast of South Africa.

More than 300 people were killed in bad weather, according to a recent report Wednesday evening. “One of the worst storms in the country’s history,” officials acknowledged.

More than 60 years of heavy rainfall over the region, which began last weekend, have left ruined terrain: bridges, roads and thousands of homes destroyed in a population of more than 3.5 million.

The 31-year-old street vendor describes his panic when he returned home Monday evening and found himself knee-deep in water. In the city of Umlasi, where he lives, on the outskirts of Durban, most houses are made of corrugated iron sheets or simple wooden planks.

More than 300 mm of water poured in 24 hours in some areas, with meteorologists comparing rainfall levels “usually associated with hurricanes”.

The mud began to rise, says Mr. Duga. “Then water poured on my roof. He fell, the walls collapsed, ”he continues in shock.

President Cyril Ramaphosa, who visited the region on Wednesday, pledged government assistance. But it was only by volunteers that Cynthemba Duga found salvation, followed by her neighbors, including mothers and the elderly who carried their children within arm’s reach.

“We help them because we care about them,” 51-year-old Mbeki Sokela, who helps find temporary shelters, told AFP.

He lives in a “hotel”, these former homes for black workers in the apartheid era, often crowded. There is not enough space, but we are trying to accommodate everyone, “he said.

In a room without electricity, another volunteer writes names in the light of a mobile phone. Many will eventually find space for a night in a pair of chairs or a cardboard box.

Volunteers also went in search of food and clothing. But with the destruction and damaged telephone network, they explain that getting basic necessities is not easy.

So those who have lost everything in an instant are counting on help to come. Rescue operations have been going on for several days. The army is concentrated.

According to meteorologists, the worst storm has passed. But they warned that it would continue to rain and that there was a risk of local flooding in the coming days.

More rain? Unbelievable by Mapeki Sokela looking at the sky still threatening. “I do not know what will happen if it rains again,” he admits.

See also  Travel Latest News: After the Telegraph campaign, long distance destinations have been added to the green list