Home World Peru: Hundreds of protesters demand the resignation of the President 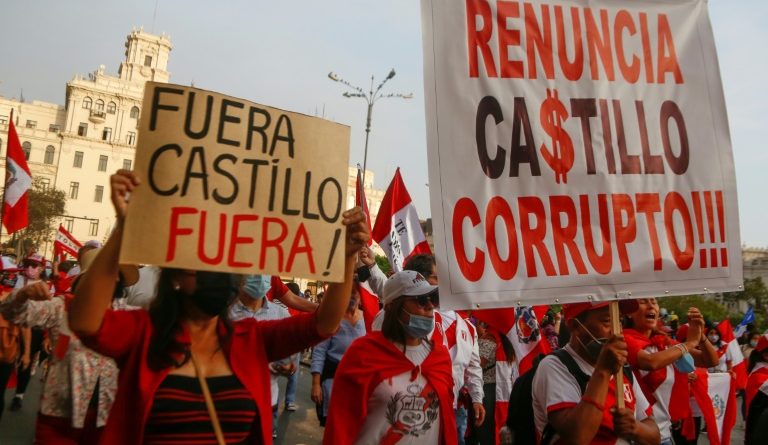 Hundreds of Peruvians protested in Lima on Saturday at the call of political and civil society to demand the resignation of far-left President Pedro Castillo.

“The president must leave the country because there is so much corruption, he is unworthy, he will lead us to ruin,” insurance company employee Ursula Portocarero told AFP.

About 3,000 riot police were mobilized throughout Lima.

“We want him to resign for the sake of the people who love their country so we can really move Peru forward,” said Tula Casado, 58.

A similar demonstration took place in the northern city of Trujillo.

On the evening of April 4, a curfew was imposed in the capital and neighboring port of Callo, home to 10 million people, following violent protests by carriers against rising fuel costs.

It was finally removed on April 5 under popular pressure and from the opposition-majority parliament.

But that same evening clashes broke out between protesters and police in Lima, with public buildings being attacked and businesses damaged.

On April 4, protests took place in many parts of Peru against rising fuel and customs and food prices.

At the end of March, the 52-year-old Mr. Castillo escaped accusations from parliament, which was dominated by the right-wing opposition, which launched a campaign for “moral disability.”

In particular, he accuses his entourage of interfering in a case of alleged corruption.