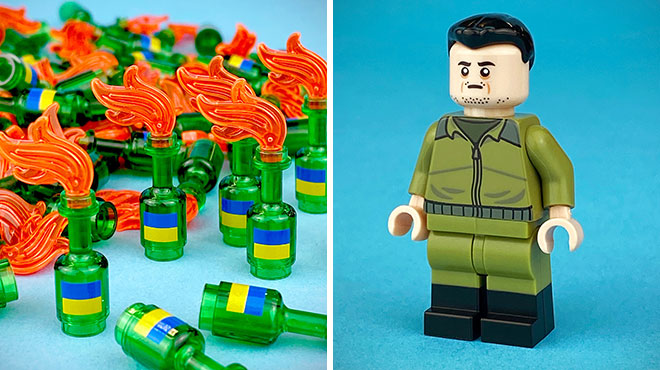 In support of Ukraine, Citizen Brick, the LEGO customization company, has created unofficial portraits of Ukrainian President Volodymyr Zhelensky. Funds raised through sales will go directly to this country affected by the Russian invasion.

The idea came from Chicago, which is based on LEGO’s customization business. To show his support for Ukraine, Citizen Brigade has decided to create unofficial portraits of Ukrainian President Volodymyr Zhelensky. The company has also imagined mini Molotov cocktails in the colors of this country. Two symbols of the Ukrainian opposition against Russia!

“In light of the recent invasion of Ukraine by the Russian military, Citizen Brick has decided to collect donations to help Ukrainian refugees.”Citizen Brick wrote in a Facebook post, noting that “All sales of these products will be donated to @directrelief, which will support their efforts to bring medical supplies to the people of Ukraine.”

Since its launch on March 5, the initiative has been a great success for LEGO activists and those seeking to help this country affected by the Russian invasion. Such a success that the company announced on Thursday that all Zelensky statues and mini Molotov cocktails were sold. “V.S.Allowed to raise an additional $ 145,000 (approximately 132,000 euros) for @directrelief to help the Ukrainian people. “Citizen Brick added on Facebook.

The US company has also clarified that it will no longer make these types of statues: “We are no longer able to produce as the required spare parts are scarce. We hope you will consider making a direct donation or direct donation to another related charity instead.”