Home World Tears, fear and anger in Kiev after the Russian missile attack 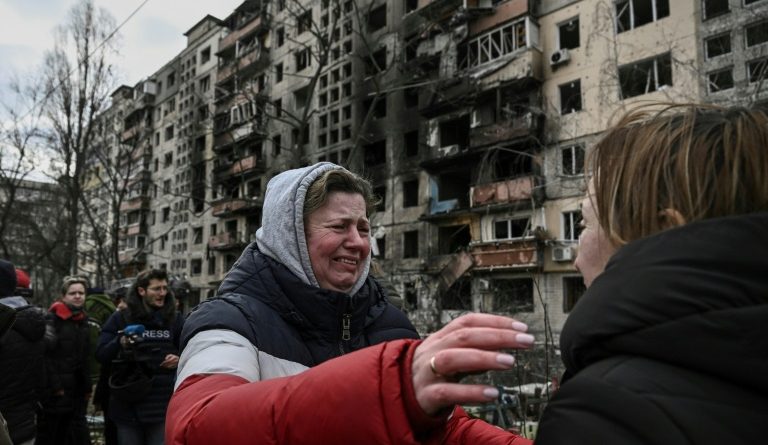 Lydia Dikovska scans the abyss left by the last Russian missile that crashed in Kiev on Monday, imagining her son’s burnt remains in scattered debris.

The 83-year-old stands motionless in the afternoon sun, staring at the twisted metal remains of a car wreck and a green trolley scattered across the streets of the Ukrainian capital.

His 58-year-old son has just left the corner shop where he went to buy food and other basic items. Then the missile – the second day after it landed on the city, increasingly besieged and shocked by Russian attacks – exploded.

“He’s lying next to the car, but they won’t let me pass,” Lydia Dikovska whispers.

Police and rescue workers crushed the piles of broken glass at their feet and measured the depth of the abyss where the missile left off near Ms Dikovska’s apartment building.

The black hole in the ground seems to be large enough to swallow a car.

But Lydia Dikovska, according to the ambulance driver, is only looking at where her son Vitaly’s remains are behind the police siege. “He was burned so badly, they say I do not recognize him, but I still want to see him,” the mother says with tears in her eyes.

“Now I will be alone in my apartment. What should I use it for? She asks.

Tears welled up in her pale cheeks, and she clung to her grandson’s elbow a little more in search of support.

“I want Russia to experience the same misery I feel now,” she said, shaking her head gently.

Russia’s attack on kyiv, which began on February 24, was initially thwarted by an enthusiastic mostly volunteer Ukrainian army, which has resumed with renewed vigor.

The second front is also opening up in the far-flung industrial districts of northeastern Kiev.

As the risk increases, armed volunteers at checkpoints in the capital are always asking for different passwords for drivers of passing cars.

In order to better distinguish the Ukrainians from the Russian saboteurs, the soldiers change the color of the ribbons worn on the elbow and calf.

This almost entrenched paranoia in the deserted streets of Q is joined by anti-Russian President Vladimir Putin’s forces.

“They killed my cat, and now Putin is done,” says Oleg Sheremet, who scoured the streets for the first attack of the day.

“The straw that broke the cat’s camel’s back,” exclaims this middle-aged man wearing a black leather coat.

kyiv Mayor Vitaly Klitschko stands with his fists clenched a few feet away from the remains of Lydia Dikovska’s son.

“The Russians want to sow panic in our city,” shouts Vitaly Klitschko in an imposing voice. “But it will never happen. It will encourage every Ukrainian to further protect our city.

A series of new explosions from the north of Q made him abruptly return to his car.

It leaves residents trying to figure out why Russia decided to attack their city’s sleep twice a few hours apart.

Oleksi Konsarenko, a Ukrainian parliamentarian who became a volunteer, did not try to control his anger at Russia and what he saw as a lack of Western support.

“There are no military targets here,” the 42-year-old said after walking between the two attack sites.

“It simply came to our notice then. They want more terrorism, they want more people to be scared, ”he continued.

In fact, many are afraid.

Vera Rechechkova, a 26-year-old hairdresser, stood with her boyfriend in a block from the site of the missile strike and cried in her handkerchief.

“We bought food one day from that kiosk and the person who worked there may not be alive now,” she said with tears in her eyes.

“It’s very bad. I do not want to harm anyone, but Putin …”, she blunts before pausing.