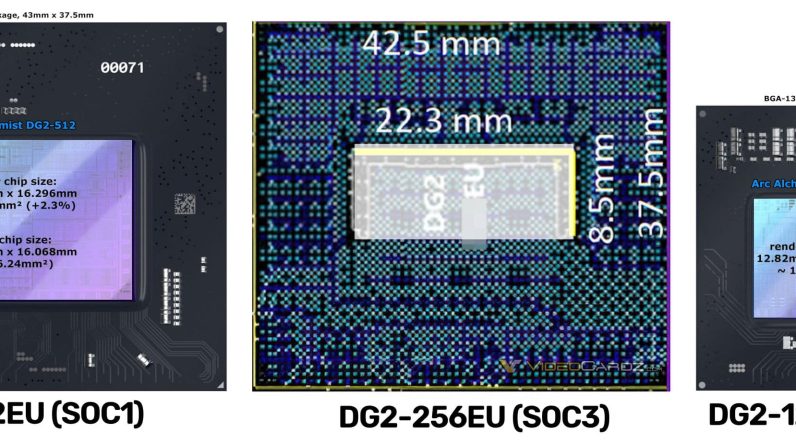 Differently called SOC3, this GPU will be included in the DG2-512 and DG2-128 GPUs designated as SOC1 and SOC2.

The latest Intel Arc Alchemsit Leak Leaks, including an internal slide, suggested that the company arrange its offer around two GPUs. DG2-512 and DG2-128. Of course, a GPU can be used to equip multiple specifications: AMD’s Navi 21 GPU, for example, equips the Radeon RX 6900 XT, RX 6800 XT and RX 6800, all of which use the maximum capacity more or less “fully”. GPUs. Komachi finds reference to the third Intel GPU on IGSCU FU connections (Intel’s Graphics System Controller Firmware Update Library for Linux), In other words, comes directly from the company: DG2-256 GPU, also known as SOC3.

The trade names of the Arc Alchemist graphics cards are unofficial at this point, so the three GPUs divide the range into three series: A700, A500 and A300. The A700 integrates Intel’s flagship with solutions with entry-level cards powered by DG2-512 GPU, A300, GPU-128. Intermediate A500 specifications are based on the GPU-256.